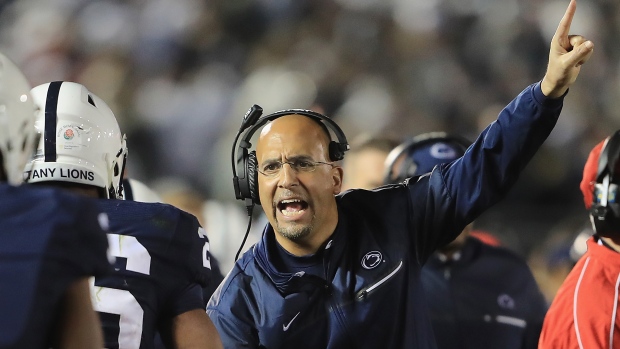 A federal lawsuit filed Tuesday by a former Penn State safety claims that coaching staff, including head coach James Franklin, ignored violent incidents of hazing of a sexual nature in the program.

Isaiah Humphries named Franklin, along with an ex-teammate Damion Barber in the suit filed on Tuesday in a U.S. Middle District Court. Barber is alleged to have “engaged in a civil conspiracy with [linebacker] Micah Parsons, [end] Yetur Gross-Matos, and [linebacker] Jesse Luketa to haze, harass, assault, batter, and retaliate against" Humphries and other “lower classmen.”

Humphries contends that his complaints about the hazing - including one perpetrator, Ottawa-born Luketa, allegedly telling him that "I'm going to [Jerry] Sandusky you" - were reason for Franklin to force him out of the program. Humphries later renounced his scholarship at PSU and transferred to California.

Humphries is seeking financial damages for harm to his physical and mental health, as well as his football career.

Later on Tuesday, the school issued a statement in response to the suit, saying that the case was thoroughly investigated and the local district attorney chose not to press charges.

“The University has established processes in place for responding to claims of potential misconduct," the school said in a statement. "In accordance with our processes, the Office of Sexual Misconduct Prevention and Response and the Office of Student Conduct carried out investigations of the plaintiff’s claims independent from Intercollegiate Athletics. In addition, Penn State police investigated related allegations and forwarded the results of that investigation to the Office of the Centre County District Attorney (DA). The DA reviewed the case and decided that no charges would be pursued.”

A native of Sachse, Texas, Humphries is the son of former CFL player Leonard Humphries, who also attended PSU.

Humphries left Penn State after 2018. After sitting out last season, Humphries will compete as a redshirt sophomore with the Golden Bears in 2020.