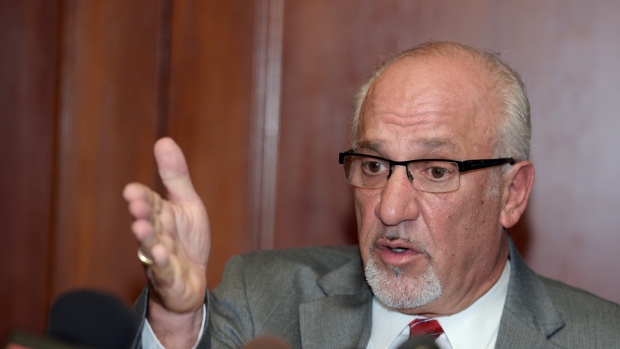 Citing misrepresentations over how a rape kit evidence bag was delivered to his office, the lawyer of the woman accusing Chicago Blackhawks forward Patrick Kane of sexual assault abruptly withdrew from the case on Thursday night.

Thomas J. Eoannou, who announced the unusual appearance of an evidence bag from the case at a press conference on Wednesday, said he could “no longer represent his client effectively.”

“Our investigation revealed to me there may have been some fabrications concerning the bag,” Eoannou said Thursday at a press conference held in the same room of his Buffalo law firm. “I was brought the bag by my client’s mother, who explained to me how she got the bag, and my investigation revealed to me that I do not have confidence in that version.”

Eoannou said his withdrawal does “not at all” change his confidence in the accusations against Kane from Aug. 2. Kane has been under investigation by the Town of Hamburg (N.Y.) police for the alleged sexual assault of a 21-year-old woman at his home after a trip to a Buffalo nightclub.

“This does not in any way reflect what occurred on the night in question,” Eoannou said. “I do not like the manner or means in which I received the bag. One has to do with someone other than my client.”

The lawyer for Kane, Buffalo-based attorney Paul Cambria, told the Buffalo News that Thursday night’s developments show the entire claim versus Kane is a fabrication.

“This case needs to go away,” Cambria told the News. “It’s tainted from one end to the other.”

Eoannou said he met with Erie County (N.Y.) District Attorney Frank A. Sedita III on Thursday to further investigate the manner in which he received the evidence bag.

According to Eoannou, Sedita “did not contest the authenticity” of the evidence bag. Sedita scheduled an 11 a.m. press conference for Friday.

Eoannou said on Wednesday he was told the evidence bag was found by the alleged victim’s mother at 1:30 p.m. on Tuesday, folded into small squares, wedged in between the front door and storm door. The bag may have been there for up to a day and a half, the accuser’s mother relayed to Eoannou, since the mother regularly used another door to exit and enter the premises.

“The bag is real,” Eoannou said Thursday night. “The bag is a real evidence bag from this case, there’s no question about that. …My concern is what the bag contained. … There’s no question it was a torn open evidence bag. It says ‘kit number’ on it. The manner in which I received it and it was represented to me, I’m uncomfortable with. I do not believe the version of the events is accurate.”

Eoannou previously stated that the appearance of the bag might have indicated evidence in the case may have been tampered with. He said Thursday he could not comment on the evidence. The Erie County Commissioner of Central Police Services said on Wednesday “all evidence” delivered from Hamburg Police “is accounted for and remains in its original packaging and in the possession of Erie County Central Police Services.”

Eoannou added that he was not sure how the bag allegedly appeared on the accuser’s mother’s doorstep, but that he lacked the confidence to continue, only further dizzying a bizarre and confusing case.

“I do know in my 30 years of practicing law,” Eoannou said, “none of us in this profession have ever seen anything like it.”