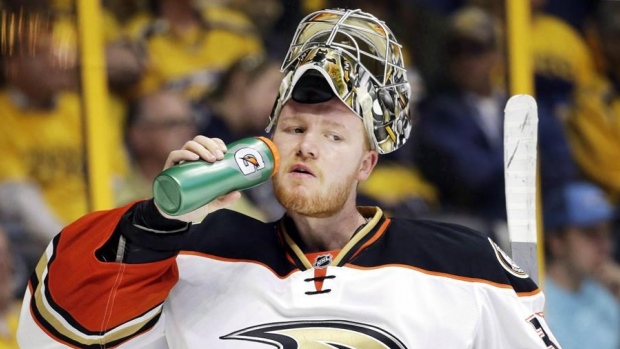 Frederik Andersen is out of this month's World Cup of Hockey.

The Toronto Maple Leafs announced the goaltender incurred an upper-body injury in Denmark's Olympic qualifier with Slovenia on Friday and will be out for three to four weeks.

The 26-year-old Andersen's legs were swept out underneath him in a collision with a Danish defenceman in an attempt to clear the puck. He landed awkwardly to the ice on his shoulder. The Leafs confirmed the injury on Friday night.

Andersen was dealt to the Leafs prior to June's National Hockey League Entry Draft from the Anaheim Ducks. He then signed a five-year, $25 million extension with the team.

Without Andersen, Team Europe will name a third goaltender. The New York Islanders' goaltending tandem of Thomas Greiss and Jaroslav Halak are also on the team.