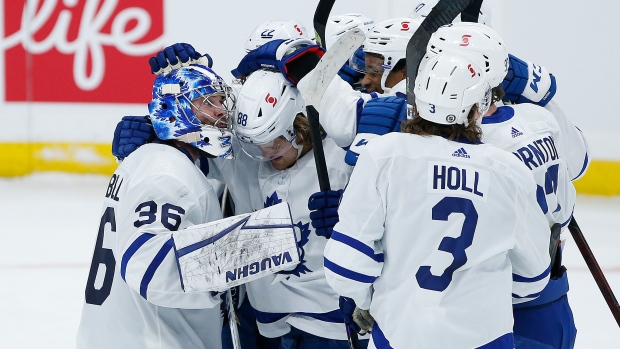 TSN Toronto Reporter Mark Masters reports on the Maple Leafs, who practised at the Gravenhurst Centennial Centre on Thursday ahead of their final preseason game Saturday against the Ottawa Senators.

The Leafs kicked off a team-bonding trip with a round of golf on Wednesday.

"Just looking at the trees made my day," said captain John Tavares with a smile. "Beautiful scenery."

But it was also a competition with the foursome of Jake Muzzin, Auston Matthews, Ilya Mikheyev and Ondrej Kase claiming top spot.

"We had a nice crew," Matthews said. "It was a full team effort. Mickey is not a huge golfer, but he made some pretty big putts for us."

This type of trip is really important for newcomers like Kase, who appreciated the one-on-one time he got with the members of his golf team.

"It's huge for me, especially," the 25-year-old Czech native confirmed.

"You can sense he's feeling more and more like himself," added Tavares.

A team dinner is planned on Thursday night as the group unwinds following a flurry of cuts.

"You guys follow us around everywhere so I wouldn't completely call it a getaway, but it's nice," Matthews told reporters, who made the two-hour drive from Toronto. "I've never been up to Muskoka before. It's a beautiful time of year so everybody's enjoyed it."

The timing of the trip is significant.

"The camp and pre-season starts to wear on the group a bit, because they just want to get on with it," explained coach Sheldon Keefe. "We're at the point now where, despite the fact we have one more pre-season game, you're shifting really into full preparation mode for the regular season."

For the first time, the numbers are manageable enough to have the entire group together on the ice at the same time. There are two goalies, eight defencemen and 17 forwards remaining with a handful of cuts still to come.

"It's just one group now so that, in itself, brings the group closer together," Keefe pointed out.

William Nylander is missing the trip, because he's not yet fully vaccinated. He has had his second shot, but the 14-day period hasn't passed.

In Nylander's absence, Kase skated on the second line with Tavares.

"It's [a] big player," Kase said with a smile. "I was very excited to be right next to him. It was pretty good practice for me."

"Just very crafty," Tavares observed of Kase. "He thinks the game really well, great deception, and he's only continuing to feel more and more comfortable as a player on the ice with the way we want to play."

Keefe believes that Kase, who scored 20 goals with the Anaheim Ducks in the 2017-18 season, is capable of playing in an offensive role.

"I think he's going to challenge our players that are in our top six,”  Keefe said last week.

Kase has spent most of camp on a line with defensive-minded countryman David Kampf.

William Nylander received his second shot last week so he's not considered fully vaccinated just yet. He didn't travel with the team on its Muskoka getaway.

After wearing a red sweater the last couple of practices, Matthews was back in his usual blue uniform on Thursday as he continues to work his way back from off-season wrist surgery.

The red sweater was purely precautionary and Matthews had still been taking contact in the previous workouts, but the fact he held up well during Thursday's strenuous 90-minute workout was noteworthy.

"Today, by far, would've been the longest session he has had," said Keefe. "Obviously, he was right there until the end. In fact, I saw him doing a little bit extra himself afterward, getting some extra shots off. All of that is very positive."

The Leafs wrap up their pre-season schedule on Saturday.

"That might be cutting it a little bit close right now," Matthews acknowledged. "You never know what can happen, but we'll see."

On Monday, following his first full practice of camp, Matthews said he's "hoping and planning" to play in the regular season opener on Wednesday.

The position in the middle of the ice on the power play is often referred to as the bumper, because of the quick bump passes needed to relieve pressure, but that may not be the best way to describe how Mitch Marner is playing in the spot.

"Mitch has created his own position, which is nice," power-play quarterback Morgan Rielly said with a small smile on Tuesday night. "He's making it work and taking the available ice."

Tuesday marked the first pre-season game that the top unit, minus Matthews, played together and the puck movement was crisp. At one point in the first period, Marner found space high in the zone and fed Tavares at the net front with a great slap pass.

"There's no one who thinks the game better in the league," Tavares gushed. "I mean, it's hard to think of too many guys that have the IQ, the awareness, the playmaking ability, the way he can see plays develop with and without the puck."

Slap pass from Marner to Tavares almost goes in pic.twitter.com/3GlfTbVt4b

"He has those instincts," said Keefe. "He jumps into spaces that are unexpected at the right times and creates looks and schemes that the opponent will struggle to plan for. That is what we are counting on: his instincts and his ability to improvise. There is increased ability to do that in the middle of the ice because you can go to a lot of different places."

Marner, who previously set up shop on the flank, has never played in the middle before on the power play. He's proving to be a quick study.

"You give him the puck in the middle of the ice, you give him so many different options," Tavares said, "and that puts the opponent on their heels. I think he'll only continue to get more comfortable and feel better there."