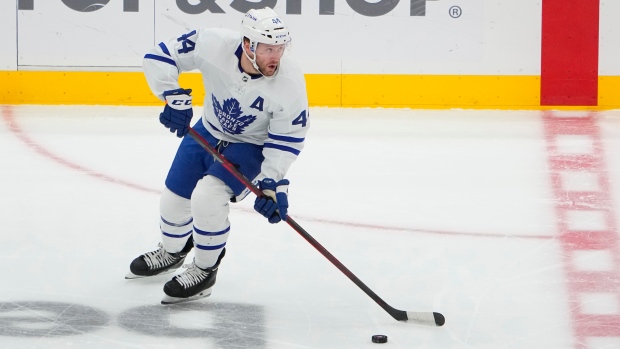 TSN Toronto Reporter Mark Masters reports on the Maple Leafs, who practised at Ford Performance Centre on Tuesday ahead of Wednesday’s game against the Anaheim Ducks.

After Saturday's 3-1 win over the Islanders in New York, teammates gushed about Morgan Rielly, who scored a goal and added an assist while logging more than 25 minutes for the Maple Leafs.

"One of the best defenceman I've played with," said John Tavares, who has suited up for Team Canada at the Olympics and World Cup. "As good as he is and as much recognition as he gets, I still think he's looked upon as a little bit underrated."

"He's a top defenceman in the league," said William Nylander, "and easily could be an all-star in any year. I agree with John. He's a very underrated player."

The 27-year-old from Vancouver, however, doesn't feel that way.

"I don't think I'm underrated," Rielly said. "I feel pretty comfortable right where I am. I just like being a part of this team...We got a close group and we want to support each other. They’re just having my back."

A team that features a lot of high-end talent.

"At times, with the big names we have up front, maybe he doesn't get the recognition he deserves in terms of all-star games and stuff like that," observed veteran forward Jason Spezza. "He's a constant every-day professional and doesn't go looking for the attention so maybe that's why he doesn't get as much attention."

Rielly is on pace for 71 points this season, which would be one off his career high set in 2018-19 when he finished fifth in Norris Trophy voting. When the three nominees were announced that year then teammate Nazem Kadri took to Twitter to vent about Rielly's omission.

@mriles4 got snubbed for the Chucky Norris award. Monster year was a slam dunk for my guy. @NHL might need to consider reviewing that one.... A nomination at the very least

"If you look at his stats and what he brings to our team, to not be at least a one-time all-star, it's insanity," said Mitch Marner. "It's crazy."

"Mitch only being to one [All-Star Game] is equally surprising," he said. "There's lots of good players on our team. There's lots of good players in our division and in the Eastern Conference and across the league that are all extremely deserving of playing in that game and being an all-star. So, I don't take it personally at all. I just try to be the best I can be and I got my hands full with that."

The All-Star Game's three-on-three format and the rule requiring every team be represented means deserving candidates are left out every year. Auston Matthews and Jack Campbell will represent Toronto at the mid-season showcase this year. Tavares was the team's candidate in the Atlantic Division's 'Last Men In' vote, which was won by Tampa Bay's Steven Stamkos. The two defenceman on the Atlantic Division team this year are Buffalo's Rasmus Dahlin and Hedman.

"The thing we all love about him is he's the same guy through it all," Marner said of Rielly. "He knows how much we love him in the locker room and on the ice. He does a lot of great things for us. Hopefully, he gets what he deserves within the coming years."

It feels like Rielly has never been more deserving. Sheldon Keefe has praised the longest-serving Leaf for shoring up his defensive play and carving out a new role on the penalty kill while maintaining his offensive production.

"His game's in a really good spot, both sides of the puck," Keefe said. "He's keeping the play in front of him and he's closing space really well."

But that doesn't mean Rielly, who serves as an alternate captain on the Leafs, isn't having a special season.

"He came into this year with a lot of pressure," Spezza pointed out. "The pressure of trying to make the Olympic team [when NHL players were planning to go to Beijing]. The pressure of not having a contract beyond this year. And you wouldn't have known it. He came in and was workmanlike. When he got rewarded with a long deal, nothing changed. And that's the reason why guys like that get long deals and you put the trust of your organization in players like that. It's because of the consistency and the work ethic and the wanting to get better."

Rielly inked an eight-year, $60-million extension on Oct. 29. Per CapFriendly.com, the $7.5-million AAV on Rielly's new deal is tied with Ekblad for 22nd among all NHL defencemen under contract in the 2022-23 season.

"Especially with d-men, as they get older they get more efficient and smarter in their game," Spezza said. "I think you're seeing that with Mo. He controls play out there and is going to be doing it for a long time."

Whether he's an all-star or not.

Keefe confirmed that the new spread-offence alignment featuring Matthews, Nylander and Marner on different lines will debut on Wednesday against the Ducks.

"We want to get a look at that and will adjust along the way if need be," Keefe said. "We do have to give it some time to play out a little bit if we want to be true to the process of seeing how this composition can [work] for our team."

"I like it," said Spezza. "It shows we're a flexible group and everybody can play different roles and I think that's important."

Matthews is skating with Michael Bunting and Ondrej Kase, Marner is with Tavares and Ilya Mikheyev and Nylander is with David Kampf and Alex Kerfoot.

"These lines have been used before," Keefe reminded reporters. "Bunting, Matthews and Kase have been good when together this season. We've used Tavares with Marner and Mikheyev a lot over my time here so that's not new for me. Kampf as centre with Nylander and Kerfoot is new, but Kerfoot and Nylander have had a great deal of time together and great chemistry and, in fact, were our most productive line in the playoffs against Montreal."

After an inconsistent first half of the season, which saw him spend time in the press box as a healthy scratch, Justin Holl feels like he's turned a corner.

"Playing better in terms of making more happen on the ice and maybe joining the offence more and driving play that way," the right-shot defenceman said.

Holl has three points in 29 games this season.

What's the key in the second half?

"Playing the game the way I know best," the 29-year-old said, "and dictating where the opponent should be on the ice instead of reacting."

Holl missed the last three games after testing positive for COVID. He doesn't expect the missed time will slow his momentum much.

"I feel really good physically," he said. "Don't feel like I really lost anything conditioning-wise, which is good. As you get more puck touches you feel more comfortable out there."

With regular partner Jake Muzzin recovering from a concussion, Holl has been skating alongside Rasmus Sandin in practice.

"He's a really easy guy to play with," said Holl. "He handles the puck really well. He uses his feet to get not only himself, but the pair, out of difficult situations so I'm really comfortable with him."

Muzzin participated in the full practice on Tuesday, but remained in a red no-contact sweater.

The Ducks arrive in Toronto after beating Tampa Bay and Boston in their last two games.

"It's definitely gotten our attention," said Spezza. "They'll come in here with a lot of confidence. A team that's playing with a lot of structure and trying to make you turn pucks over and be opportunistic."

The Leafs beat the Ducks 5-1 in Anaheim on Nov. 28, but Jack Campbell faced 40 shots that night. Campbell will get the start on Wednesday.

Josh Ho-Sang was among those named to Canada's Olympic roster on Tuesday. The Toronto Marlies forward made a good impression on the Leafs when he attended training camp on a pro tryout.

"We're proud of him," said Spezza. "He's a guy who's worked really hard to try and change the narrative around his game. I haven't watched him a ton this year with the Marlies, but when I have he looks dynamic and looks like he's committed."

Spezza stays out after Leafs practice to work with Ho-Sang and Robertson pic.twitter.com/glQSptFBUY

"He's worked to get better and reestablish himself here in North America," said Keefe. "He's done a good job of that and recognition of the Olympics is obviously a very good thing. It's tremendous for him."

Ho-Sang, a first-round pick of the Islanders in 2014, signed an American Hockey League contract with the Marlies after Leafs training camp.

"He put himself in some uncomfortable positions in the summer where he had to work different and harder probably than he has in the past," Spezza said. "He came here with a great attitude and when you do that you win people over and I think he has some fans in this room. We'll be cheering for him to get a gold medal. It's a great opportunity and a great opportunity to show that he's still growing."