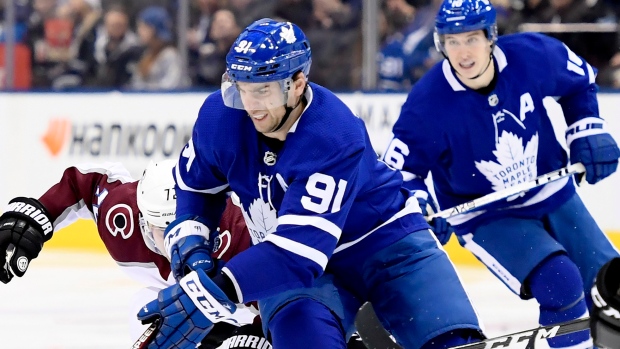 TSN Toronto reporter Kristen Shilton checks in daily with news and notes on the Maple Leafs, who held an 11 a.m. team meeting at Enterprise Center in St. Louis ahead of Saturday night’s game against the Blues.

The Maple Leafs’ offence has slid into another rut of late, producing just four goals in the team’s last three games. And head coach Sheldon Keefe has an idea as to why.

“I think we found in our game that we've lived on the perimeter a little bit too much and been satisfied with that,” Keefe said after the Leafs’ team meeting on Saturday. “So we do have to get on the inside, but we have to challenge for those spaces with the puck, not just without the puck. So that's part of it. But there's a whole process that has to take place in order to give ourselves even a chance to do that against this team and it starts with getting out of our end clean, and getting through the neutral zone.”

Keefe hasn’t been shy about tinkering with his line combinations, and he’ll do it again by moving Zach Hyman back up to the Leafs’ top forward unit with John Tavares and Mitch Marner after leaving Hyman on the Leafs’ third line with Alex Kerfoot and Kasperi Kapanen for the past two games.

“We talked about Hyman and what to do with him because he was excellent with the Kerfoot line the other day,” Keefe said. “But we just thought it was a good opportunity to get him reunited with JT and Mitch. We'll see how it goes; I would expect that things will be fluid.”

That Tavares line played together for the entirety of last season to good success, helping Marner achieve a career-high in points (94) and Tavares hit career-highs in goals (47) and points (88). But an ACL injury to Hyman in last April's first-round Stanley Cup playoff series against Boston forced him to miss the Leafs’ first 19 games of 2019-20, and then Tavares sat out seven games with a finger break and Marner was sidelined for 10 contests with a high-ankle sprain, all of which has prevented that trio from recapturing the magic they had a year ago.

At least, Tavares hopes, until now.

“I think we all have a good idea of how we play and our tendencies, so it'll be good to get back to some of the things that we do well,” he said. “It's obviously been a while so we'll just continue to go out there and be reliable in all three zones and obviously we want to be productive and produce.”

Despite the ups and downs of the season, Tavares has still amassed 20 points (10 goals, 10 assists) in 23 games, while Marner has 18 points (four goals, 14 assists) in 19 outings. For an offence desperately seeking a spark, going back to what’s comfortable could be just what gets Toronto over the slump.

“We've played in a couple tight hockey games [recently],” Tavares admitted. “If we can find a way to get a little bit more around the net and in the middle of the ice, that's what we would like to do and with the type of shooters we have, I like our chances.”

After being recalled from the AHL’s Toronto Marlies on Friday, Pontus Aberg will make his Leafs’ debut in St. Louis to replace the injured Andreas Johnsson. But what Keefe wants most from Aberg is to just be himself.

“We just encourage him to do what he's done,” Keefe said. “He's played in the NHL lots and that's why we're giving him the chance here. The experience that he has and what he's produced in the league before [is good] and he's going to play with good players [in Auston Matthews and William Nylander]. I've got experience coaching him [earlier this season with the Marlies], so it should be a little more comfortable in that sense. So, let's put him on the ice and give him a chance to play.”

A veteran of 127 NHL games between Nashville, Edmonton, Anaheim and Minnesota, Aberg signed a one-year, $700,000 free agent contract with the Leafs last summer hoping to revive his career. The 26-year-old started off the 2018-19 campaign playing with Ryan Getzlaf on the Ducks’ top line and producing as one of the team’s leading scorers with 19 points in 37 games. But then his success slowed, and Aberg was left searching for what’s next.

Now Keefe is giving him the opportunity to find out.

“When he's at his best, with his speed and his skill set, [he's] above AHL level,” Keefe said. “He is a guy that jumps off the page in terms of giving him a chance so we're going to do that. He's had success in the league before; he's also had times where it hasn't gone well, which is why he's found his way back to the American League. It's a fresh chance for him here.”

The story of how St. Louis went from worst to first in the NHL last season is well documented: Their slow start forced the firing of head coach Mike Yeo and promotion of Craig Berube to interim head coach by mid-November; they were dead-last in the NHL standings as of Jan. 3, 2019, and then the emergence of rookie goalie Jordan Binnington helped propel the Blues all the way to becoming Stanley Cup champions by June.

The Leafs can see why parallels are being drawn between where they’re at now and where the Blues were a year ago. Toronto underwent a coaching change with the firing of Mike Babcock and promotion of Keefe, and the Leafs are currently sitting out of a playoff spot, but that doesn’t mean they derive any extra inspiration from what St. Louis was able to accomplish in the face of its own previous adversity.

“I don't think we look at it that way,” Tavares said. “I think going into the next couple weeks here before Christmas, it would be nice for us to really get some results and get some momentum and really do some good things. There have been plenty of teams over the course of the last number of years that don't always start the best but seem to find their game at some point throughout the year and be able to have success in the playoffs.”

“Even on paper last year when they weren't doing too well, I think it surprised a lot of people,” Marner added of last year’s Blues. “They got a great group of players and a lot of skill and when I saw it turn around, I wasn't too surprised by it – I knew the kind of talent they had and the depth they had. We believe in our group and we think we can achieve great things so it's just about making sure every day we come in here and do them.”

Tavares said he avoids looking at the standings at this point anyway, preferring to deduce how the Leafs are doing by other means.

“We know, just by the way you feel after you leave the rink some nights, that we obviously want to be better and do a better job of getting the results we need,” Tavares said. “We've had some good stretches, I just don't think we've sustained it as long as we'd like and we got to find a way to win some games that maybe can go either way or even some that you maybe you don't even maybe truly deserve to win but that's what good teams do so, we got to continue to push for that.”

When Keefe made the decision to healthy scratch Frederik Gauthier from Wednesday’s game against Colorado, it was for the same reason Gauthier will be a scratch again in St. Louis – and it’s nothing personal.

“I told Fred, we feel pretty comfortable with who he is and what he's done in the organization,” Keefe explained. “I'm very familiar with him, all the coaching staff and management, everybody here is familiar with him. We're in a situation where we have some other guys that we would like to give some opportunities to and see what they can bring and see what they can add to the mix.”

To that end, Nic Petan will step back onto the fourth line Saturday, skating with Jason Spezza and Pierre Engvall. Petan’s return also forces Dmytro Timashov out of the lineup as a healthy scratch.

Gauthier had played in every game this season prior to Wednesday, slotting in mostly on the wing under Babcock until Keefe shifted him back to centre. He’d also seen an uptick in his ice time from his first full NHL campaign in 2018-19, averaging 10:26 TOI per game this season compared to 8:22 a year ago.

But Gauthier’s offence output has been low with only five points (two goals, three assists) in 29 games.

“We've liked how Fred's played, he's done well,” Keefe insisted. “But we're trying to find the right mix for our team and we've got to try some different things, so in the interim he's going to have to take a step back a little bit.”

When the Leafs arrived in St. Louis late Friday afternoon, Marner made a beeline for the home of his former linemate Tyler Bozak, bringing goaltender Frederik Andersen along for the ride.

Bozak played nine seasons with the Leafs before leaving for St. Louis as a free agent in July 2018, two of which he spent centring a unit with Marner on his wing. Now a father of two, Bozak opened his doors to the visiting Leafs for a spirited game of mini sticks with his son Kanon (which was documented on social media by Bozak's wife Molly, who claimed little Kanon was trying to “tire out the enemy”).

Trying to tire out the enemy 🍁 pic.twitter.com/dCPRklobd7

“We only played one game,” Marner jokingly insisted. “Bozie made sure that Kanon knew we were only playing one game. But it was good to see that family again, it's been a while. My first year, Bozie meant a lot to me and helped me out with a lot of things so I owe him a lot.”

It’s possible the Leafs could see Trevor Moore back in the lineup before their four-game road trip comes to an end next Saturday night in Edmonton. The winger, who injured his shoulder on Nov. 15 against Boston, is travelling with the team and progressing well, suggesting that a return could be on the horizon.

“He seems to be getting closer,” Keefe confirmed. “The fact that he's on this trip is a positive sign so we're getting there. Not expecting him in the early part of this trip, I think there might be a chance in the latter part of it but just the fact we can get him more involved here would be a sign he's not too far away.”

Toronto previously placed Moore on Long Term Injured Reserve to use the cap relief, dictating he needs to miss at least 10 games. Moore will hit that mark by sitting out Saturday’s game in St. Louis, and making him eligible to return at any point during the Leafs’ Western Canada swing.