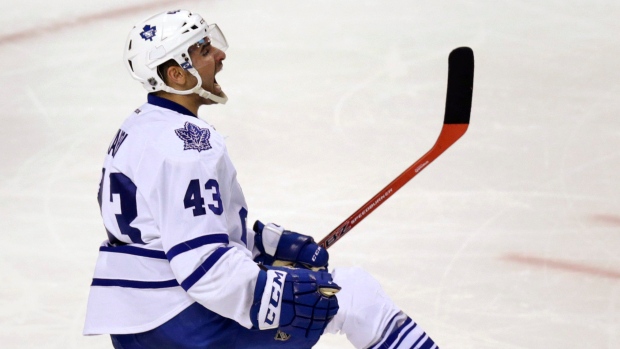 TSN Toronto reporter Mark Masters checks in with news and notes from Maple Leafs practices and game-day skates. The Maple Leafs practised at the MasterCard Centre ahead of tomorrow's game against the Washington Capitals.

- The Maple Leafs find themselves three points out of a playoff spot through 20 games this season, but the sense in the dressing room is the team is well positioned. "We're right where we want to be," said centre Nazem Kadri, who's tied for the team lead with eight goals.  "We're very much in the hunt." So, he sees playoff potential? "I don't see why not. We've been playing well and as the season moves on we're just going to get better and better and just evolve as a group. Our younger guys are going to start learning and I can't see stuff like blown leads happening in March and April when it really matters, February even." Head coach Mike Babcock was striking a more cautionary tone. "We do lots of good things, we do lots of silly things," he said. "We got to learn how to win. We've managed ourselves into losses instead of wins just because of our ability to take care of the puck a little bit. We got a lot better, but we got a long way to go." Babcock's goal this season is to gain six points in every five-game segment, but the Leafs only achieved that once. They are four points behind his desired pace. "We're OK with where we're at," said Morgan Rielly. "We'd like to be a bit higher but, with that said, it's very early. We're really confident with the group we have. We've had times where we've played extremely well and we've had other times when we've shown our youth. I think we have a lot to go on."

- A big question is whether this young Leafs team featuring seven rookies will, at some point, hit a wall. "I don't know why they'd hit a wall," Babcock said. "To me, they're young, they're full of energy, treat them pretty good. Now, mentally can you hit a wall? Probably, for sure. But if you want to be a real good player you got to fight through it." Mitch Marner is convinced fatigue won't be an issue. "A lot of the young guys that are here, they played pro last year, a lot of them played in the AHL, (Auston Matthews) played in Zurich and had a long season with that USA Hockey thing across the country and we've all played a lot of games last year so we got young legs and we won't get tired." Matthews, who had a shorter summer than usual thanks to the draft and World Cup, said he's never played more than 60 to 70 games in a single season. And there's nothing quite like the grind of the NHL. "It's a different level," Matthews acknowledged. "It's much faster, higher intensity, it's the NHL so it's definitely going to be a challenge, but it's your rookie season, it's a learning process. You definitely need to learn as much as you can and go into it doing everything you can to keep your body healthy, staying healthy, feeling energized out there and being able to compete."

- In the last three road games, Babcock has played Connor Brown with Matthews and Zach Hyman. Matthews finally snapped his goal drought on Wednesday in New Jersey and was asked what Brown brings to his line. "Adds a lot," he said with a smile. "We're roommates on the road and spend a lot of time with each other outside the rink so it's nice. He's a great player, he does so many little things that I think go unnoticed on the ice. He's very skilled. He's definitely a very fun player to play with." Brown skated with Matthews at Friday's practice, but Babcock suggested he'll be back with Kadri for Saturday's game at the Air Canada Centre. "On the road that frees us up, but we still like the other (alignment) at home, because we want Brown to play against the top players. We need everyone to be competitive. That, to me, is the bottom line. It doesn't matter how much skill you have, you have to be ultra competitive and Brownie is that."

- Team defence remains a point of emphasis for the Leafs. "I didn't think some of the mistakes we made last game were being young, I just thought it was not doing our job," Babcock said. "Box outs were a problem on a few of their goals. The reality is, we got to play better in our own zone and be stingier. Any time they score two goals when they are under you at your net, not good enough." Wednesday was a rough night for the top pairing of Rielly (32.35% Corsi For) and Nikita Zaitsev (40.62% CF)^. "We have meetings about how we can be better defensively and what we have to do to limit the chances against and the shots and that's ongoing," said Rielly, who was on the ice for all four Devils goals. "As long as you can play defence, the offence will take care of itself when you have this much talent on a team. For us, it's really important that we take care of our end and tighten it up."

^ Likely a placeholder for Komarov