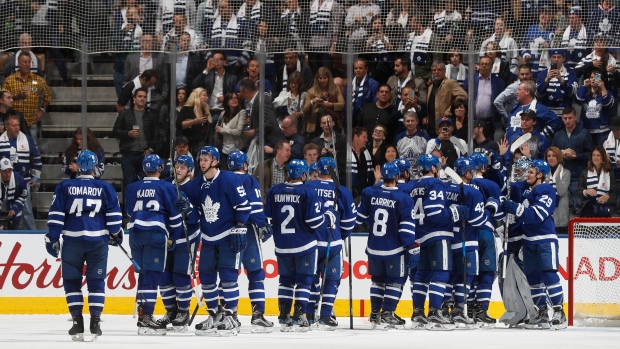 TORONTO – The night that set out to honour great Toronto Maple Leafs of the past ended up being dominated by the club’s future stars.

For the second straight game, no script could have been better than the Maple Leafs’ reality. Just ask Mitch Marner.

Playing his first regular season NHL game at home on Saturday night, the Toronto native was coming off an excellent performance in Ottawa on Wednesday that didn’t result in a score. But he didn’t have to wait long to light the lamp in front of a multitude of friends and family – even if his mom was in the restroom when he tallied it.

“Every kid dreams of that puck going in the net, especially in front of your home crowd,” Marner said of his first-period marker. “It was a special moment for me and something I’ll remember for the rest of my life. The excitement just takes over your body and you hear the fans cheer and it’s exciting.”

"Exciting" might also describe Saturday’s contest against the Boston Bruins, which was also the Maple Leafs Centennial Anniversary home opener. The game was preceded by a ceremony retiring 16 previously “honoured” jersey numbers for the Maple Leafs, plus Dave Keon’s No. 14. It ended in a 4-1 win for Toronto, their first of the season in their second tilt. It took twice that long to earn a victory last season. End-to-end chances for both teams meant a high-energy pace, even if Toronto wasn’t particularly prudent with the puck.

Ultimately, it’s the kids’ tenacity that has made the Maple Leafs the first team in the expansion era to have rookies combine for each of their first six goals of the season. Auston Matthews scored four on Wednesday in Ottawa and Connor Brown netted his first of the season for Toronto early in the opening frame on Saturday. Marner didn’t allow frustrations from not scoring sooner stifle his production at home.

“I had a lot of chances in Ottawa and nothing really cracked open. To feel that relief go through your body, it was really exciting for me,” Marner said. “It helps playing with [James van Riemsdyk] and [Tyler] Bozak. They trust me with it out there, so as a young kid you feel pretty respected.”

Marner played well on both side of the puck, clearing the zone on one heads-up play to give the Maple Leafs a much-needed change after a successful penalty kill. He just missed van Riemsdyk on a cross-ice feed with a gaping net after Marner blocked a shot in the defensive zone, corralled and banked the puck up off the boards, only to pick it back up himself and create the scoring chance. Marner led the team with four shots on goal and five rookies combined for 12 of Toronto’s 24 shots.

From start to finish, Saturday was continually described as a night to remember. But it was also the perfect bridge between 100 and 001, where Toronto’s players aim to write their own history.

“It’s electrifying,” Nazem Kadri said of the team’s young talent. “It really felt like, coming into this year we had some new faces, but we also knew what to expect from each other. New jersey, new logo, clean slate.

“It was nice for us to be introduced as a group [before the game] instead of individuals. That’s really what we want to focus on – that crest on the front.”