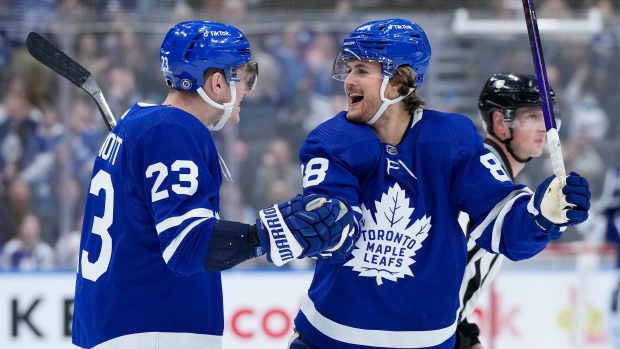 Toronto started off the week with a bang, spoiling Nathan MacKinnon’s return with a big 8-3 win over the Colorado Avalanche. The rest of the week wasn’t as smooth, with back-to-back losses to the Wild and Jets over the weekend, and the Maple Leafs relinquished first place in this week’s Power Rankings.

Toronto continues to have the best expected goal differential in the NHL, but they lack finish, which is surprising for a team with so much offensive talent. They have a true shooting percentage (goals / shot attempts) of 4.6 per  cent, 22nd in the NHL. Toronto was sixth in the NHL in that category last season, so it’s safe to assume this number should go up over the rest of the year.

The Flames drop a couple of spots despite a 3-1-0 record over the past seven days, thanks to Minnesota and Florida passing them with flawless weeks. Calgary was also playing it close, with all four of their games decided by a single goal, including two wins in shootouts. They now sit atop the Pacific Division standings, three points ahead of the Oilers, although Edmonton has two games in hand.

A staple in the top 10 since the start of this year's rankings, Edmonton falls just short this time, coming in 11th after a 1-2-0 week. Their losses didn’t exactly come against powerhouses either, dropping games against the Kraken and Kings.

On the bright side, Evan Bouchard had four points this week, including a pair of goals, to continue his breakout year. He’s established himself as a key piece on the blueline. He leads the team’s defence in points with 15, 12 of which have come at even strength. He's also second to only Darnell Nurse with 21:34 of ice time per game.

Winnipeg’s week could not have started any slower, with a 1-0 loss to the 32nd-ranked Arizona Coyotes. They bounced back in a big way, winning their next two games and scoring a combined 14 goals, including a 6-3 win over Toronto. Mark Scheifele (four goals) and Nikolaj Ehlers (three goals) led the way, accounting for half of the team’s offence this week while no other Jet scored more than once.

A week that started with a win over the Canadiens in Montreal’s first game after firing multiple front office members, ended with the Canucks clearing house themselves.

Vancouver fired head coach Travis Green and general manager Jim Benning after fans clearly showed their feelings, throwing a jersey on the ice in a loss against Pittsburgh. Bruce Boudreau has been hired to replace Green and will try to turn around a talented but underachieving group.

In Jeff Gorton’s first week as VP of Hockey operations for Montreal, the Canadiens showed why change was needed, going once again winless and failing to build on the momentum of last Sunday's win against the Penguins.  Already ravaged by injuries, the Habs added the names of Jeff Petry and Josh Anderson to the long list of injured players. On top of that, Sami Niku and Brendan Gallagher had to enter the COVID-19 protocol. A tough season continues in Montreal.

The Senators managed to avoid last place this week after beating Carolina and Colorado, a pair of top-10 teams. It’s not enough to rank them any higher than 31st, however.

They’re still next to last in goal and expected-goal differential. All three of their goalies own sub-.900 save percentages, which contributes to Ottawa’s league-worst 3.91 goals allowed per game.