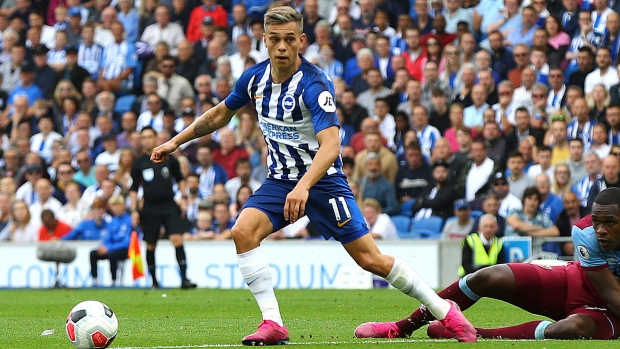 BRIGHTON, England — Leandro Trossard scored a stunning goal on his Premier League debut to secure a point for Brighton against West Ham on Saturday.

Trossard, a summer signing from Belgian side Genk, struck shortly after Javier Hernandez had given West Ham the lead against the run of play.

The 24-year-old Trossard also had a goal ruled out by VAR and missed an easy scoring chance before he eventually got off the mark to earn his new side a 1-1 draw.

Brighton was dominant throughout with new manager Graham Potter seeing his side play some confident football.

Manuel Lanzini sent Hernandez scampering through on goal in the 61st. Mat Ryan got a touch on the former Manchester United and Real Madrid striker's shot — West Ham's first on target all match — but the ball still rolled over the line to put the visitors ahead.

The lead lasted barely three minutes when Trossard rifled in a brilliant strike from near the edge of the area.