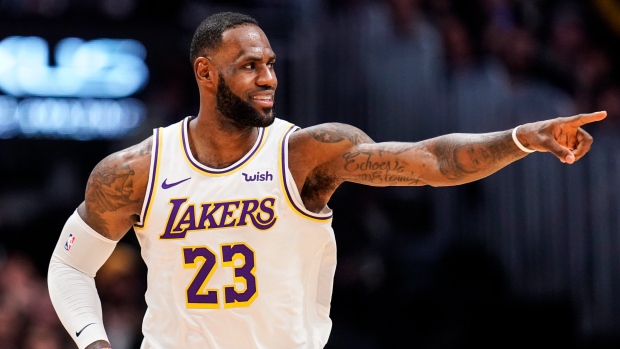 LeBron James blatantly traveled during Wednesday night's win over the Utah Jazz. The Jazz knew it. The fans knew it. Even LeBron knew it.

"It was the worst thing, probably one of the worst things I've ever done in my career, James said after the game. "I didn't realize I did it until halftime. One of my coaches showed me."

James told reporters he was distracted by teammate Kentavious Caldwell-Pope and Donovan Mitchell getting tangled up down low and it caused him to take his mind of his dribble.

Teammate Danny Green said he didn't see the play at the time, but had a good laugh about it after the game.

"That was pretty bad," James added.

The play happened in the first quarter when James was dribbling at the top of the three-point arc while loosely guarded by Utah's Bojan Bogdanovic. In the middle of his dribble, James inexplicably stopped and walked forward three and a half steps before continuing to bounce the ball. Nearby referee Jacyn Goble -- nor any other official -- did not blow the whistle and play went on despite demonstrative protests from Bogdanovic.

Missed call or no missed call, it likely wouldn't have mattered as the Lakers went on to blow out the Jazz 121-96 for their second win in a row and their ninth in their past 10 games.

The win was also James' first in Utah since December of 2010 as a member of the Miami Heat, snapping a streak of eight straights losses.

The 19-3 Lakers will be back in action Friday night in Portland against Carmelo Anthony and the Trail Blazers.