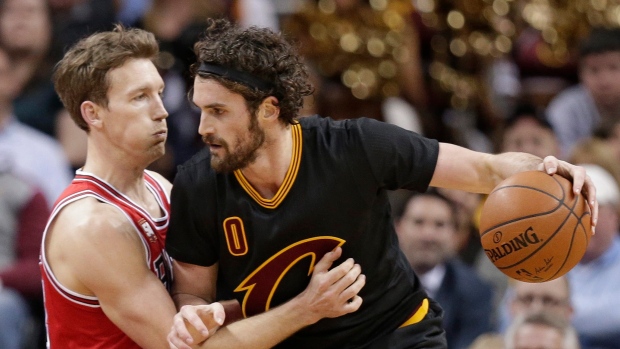 CLEVELAND - There was no loud music, none of the usual joking around inside Cleveland's locker room.

The mood was sombre after a win. The Cavaliers no longer have Anderson Varejao.

LeBron James scored 25 points and barely missed a triple-double, Kevin Love added 15 points and 15 rebounds and the Cavs looked refreshed and refocused following from the All-Star break with a 106-95 victory over the Chicago Bulls on Thursday night.

James had nine rebounds and nine assists in 35 minutes for the Cavs, who lost their first two matchups with Chicago this season. But the Bulls are broken, missing three key players because of injuries.

"In the first two games we didn't match their intensity and got beat," James said. "Today, I think we answered the call."

Cleveland has its sights set on finishing with the East's best record and earlier in the day the club acquired forward Channing Frye from Orlando in a three-team trade the Cavs hope can get them an NBA title. But to get Frye, the Cavs had to deal the wildly popular Varjeao.

He spent 12 seasons with the Cavs, endearing himself to his teammates with his hustle and becoming one of the city's most popular players, known as "Wild Thing" for his all-out style and long, frizzy hair.

James will deeply miss Varejao, his teammate for eight seasons.

Derrick Rose scored 28 points and Pau Gasol had 14 for the Bulls, just 5-14 since they were a season-best 10 games over .500 on Jan. 9. Chicago is currently without Jimmy Butler, Nikola Mirotic and Joakim Noah.

"We've just got to stay together through the good, the bad and the ugly — and it's the ugly right now," Rose said. "I'm going to keep controlling what I can control. We're trying to fight to be in the playoffs."

With the Bulls hanging around in the third quarter, James scored seven points during a 15-4 run capped by his dunk off a lob from J.R. Smith. James celebrated his latest highlight clip, which gave the Cavs a 17-point lead, with a dance that would have enraged Noah, who complained about similar theatrics by the four-time MVP in the past.

Love was aggressive inside all night in his first game since sustaining a shoulder stinger on Feb. 10.

The Bulls also were involved in a three-team trade before the NBA's 3 p.m. deadline, but it didn't involve Gasol.

Instead, Chicago sent veteran guard Kirk Hinrich to Atlanta for a future second-round pick and acquired guard Justin Holiday from Utah. The moves save the Bulls some luxury tax money but they certainly won't tilt the balance of power in the Eastern Conference.

There had been loud rumblings that Gasol would be dealt, but the veteran centre is staying put and remains open to re-signing with the Bulls as a free agent this summer.

"I was surprised there was so much noise about it," Gasol said. "The positive is hearing that a lot of teams are interested in my services. The negative is the uncertainty and waiting for your team to pull the trigger. If they didn't trade me, the assumption is they would like to keep me. I assume that's their mindset."

Despite the Bulls' many problems, Mike Dunleavy feels the team can regroup.

"I know we'll win a lot of games and end up fine, but the margin of error is small for us right now," said Dunleavy, who played his fourth game after missing 49 with a back injury. "We believe in the guys in this locker room and the coaching staff. You've got to love the challenge."

Bulls: F Taj Gibson is the only Chicago player to appear in all 53 games this season. ... The Bulls lost for the first time in six games on Thursday night. ... Hinrich finished his career with Chicago ranked third in games, assists and steals, behind only Michael Jordan and Scottie Pippen.

Cavaliers: G Matthew Dellavedova scored seven points in his first game after missing five straight with a strained hamstring. ... Varejao's impact extended beyond the floor, and coach Tyronn Lue said the easygoing Brazilian will be missed. "It's going to be tough on me, just knowing what Andy meant to his organization, meant to the fan base," Lue said. "Every time I played him, he was there. Every time I called his number, he was ready. And just having those type of guys around: professional, always smiling, in a good mood, always holding other guys accountable, that's just a great guy to have around. And it's a hard guy to lose."