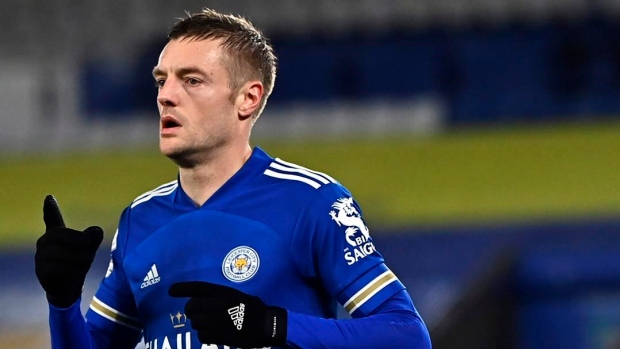 Manager Brendan Rodgers confirmed on Friday that striker Jamie Vardy would be undergoing hernia surgery and sidelined for several weeks.

"We've been managing him over the past few months," Rodgers said. "He can't hold it off for much longer - there's a lot of time in the season for him to make an impact."

Vardy, 34, has 11 league goals this season, two off the pace of leader Mo Salah of Liverpool.

With the former England international on the shelf, the Foxes have only two healthy recognized forwards in Ayoze Perez and Nigeria international Kelechi Iheanacho, but attacking midfielders James Maddison and Harvey Barnes have starred this season, combining for 23 goals across all competitions.

Rodgers believes his team can shoulder the load without their star.

"We've played without Jamie before and scored and won," Rodgers said. "He's contributed to the team over these past few weeks even if he hasn't scored. When you don't have one of the top strikers in the league, it's always going to be disappointing. It's not overly concerning, it's our best chance of getting him back. Perez is a natural striker. He doesn't threaten the backline as quickly as Vardy, but he's a great finisher. I've got [Iheanacho] who can offer a threat, too."

Leicester currently sits third in the table on 38 points, two back of leaders Manchester United. They return to Premier League action on Wednesday against Everton at Goodison Park.