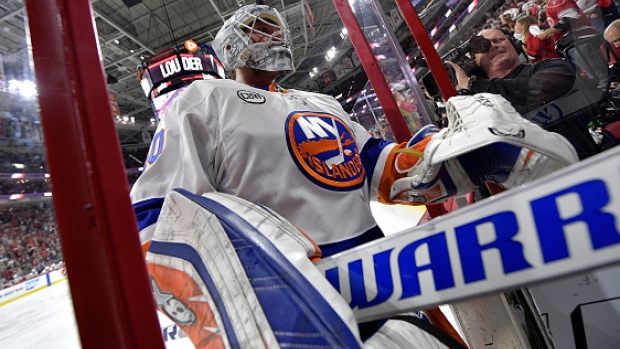 LAS VEGAS - Robin Lehner can be recognized as the best player at his position in the best league in the world on Wednesday, but there is one award that means more to him than the Vezina Trophy.

“The Masterton,” Lehner said, without hesitation.

That would be the Bill Masterton Memorial Trophy, awarded annually by the Professional Hockey Writers’ Association to the NHL player who best exemplifies the qualities of perseverance, sportsmanship and dedication to hockey.

The New York Islanders goalie is a finalist for both the Vezina and Masterton at the NHL Awards show at Mandalay Bay Events Center, hosted by Saturday Night Live’s Kenan Thompson.

“Both are fun, but the Masterton means a lot more to me and my wife and my kids,” Lehner said. “Just being nominated for that award is huge for me and my family. I think it’s huge for everyone that’s been supporting me, too.”

Last September, Lehner put it all on the table. He detailed his battle with substance and alcohol abuse and thoughts of suicide in an incredibly moving first-person piece. That was before training camp had even opened.

Then Lehner put it all together on the ice, helping the Islanders go from worst to first in goals against and finishing second (.930) in save percentage to only Dallas’ Ben Bishop in 46 appearances. The Islanders swept the Pittsburgh Penguins in the first round in a season in which most pundits picked them to miss the playoffs.

Lehner was a big part of what Barry Trotz said was one of his most fulfilling years coaching, which came on the heels of winning the Stanley Cup with Washington last June.

“All of the stuff we did on the ice, that’s entertainment. That’s not real life,” Trotz said Tuesday. “I’m so proud of Robin. The stuff I’m really proud about is he was able to stay on track in his own personal life, fighting his own demons.”

Trotz said he rode over to Tuesday’s media availability in Vegas with Lehner and could “just see the determination in him” to want to continue to speak about his struggles.

“Because he’s not the only guy in the league [with those struggles],” Trotz said. “Sometimes guys are afraid to speak out. To me, it showed strength in what he did. That strength he showed coming out and declaring it when he did, he’s determined to make this something that other players can benefit from and learn from, and also give him strength to beat his own demons.”

For Lehner, it remains a daily fight.

“He hasn’t beat it,” Trotz said of Lehner. “It’s a lifelong thing.”

Lehner, 27, is a pending unrestricted free agent for the second summer in a row. He made $1.5 million last season and is due a sizeable raise. His first sober season produced incredible results, but he freely admits his sobriety is the question mark in negotiations with the Islanders.

The Islanders don’t have to look far for a cautionary tale.

The Carolina Hurricanes signed goaltender Scott Darling to a four-year, $16.6 million deal in 2017 after his public substance abuse battle. Darling has struggled mightily in his 51 starts over two seasons in Carolina – compiling a .887 save percentage – and was granted an “indefinite personal leave of absence” in February.

The Hurricanes are now wrestling with whether to buy Darling out of the final two years of his contract.

With the help of the NHL/NHLPA substance abuse program – which Lehner again credited with his success on Tuesday – and a front-and-centre public approach to his challenge, Lehner is confident he can remain with the Islanders for years to come.

“I’m just looking forward to getting a deal done,” Lehner said. “It’s been a great experience, a great year. The year in itself has been special, all of the small accolades.”

Lehner and partner Thomas Greiss already share the William M. Jennings Trophy for allowing the fewest goals against this season. Some more hardware is likely on the way.

“That will be icing on the cake,” Trotz said. “If you ask him, the award has already been given. He’s got his family back and his life back. He’s got his own career back. He’s got all of those things that are really meaningful. The rest are just symbols.”