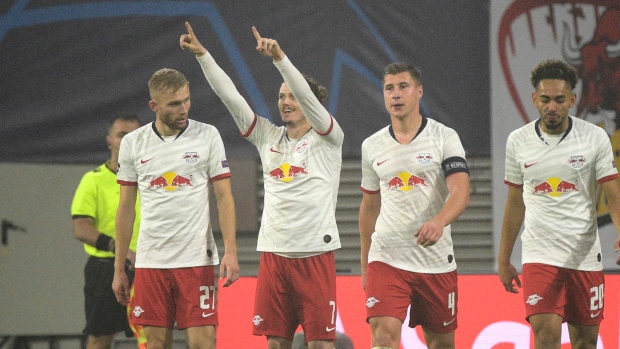 LEIPZIG, Germany — Marcel Sabitzer scored with a sublime volley as Leipzig came from behind to end a four-game winless streak and boost its chances of Champions League progress with a 2-1 win over Zenit St. Petersburg on Wednesday.

Sabitzer netted the winner in the 59th minute after controlling a cross with his chest and unleashing a curling shot into the far top corner.

"It's without doubt one of the best goals of my career," Sabitzer said.

Sabitzer also set up the equalizer for Konrad Laimer as the German side moved top of Group G with six points from three games, though Lyon had a chance to reclaim the lead when it played at Benfica later.

Leipzig, which was beaten 2-0 at home by Lyon, hadn't won a game since a 3-0 Bundesliga win at Werder Bremen on Sept. 21.

"We were under a bit of pressure after the loss to Lyon, but we dealt with it and now have our fate in the group in our own hands," Sabitzer said. "A great evening of football."

Ukrainian defender Yaroslav Rakitskiy opened the scoring for Zenit in the 25th minute, controlling the ball on his chest outside the penalty area after Leipzig failed to clear, then letting fly with his left boot inside the right post.

Leipzig dominated possession in the first half but Timo Werner, Lukas Klostermann and Laimer missed the few good opportunities the home side created.

Leipzig coach Julian Nagelsmann reacted by taking off Werner at the break for Matheus Cunha, and the Brazilian almost scored with an overhead kick that went just wide in the 49th.

But Laimer equalized straight afterward, shooting inside the far corner after Sabitzer played him through.