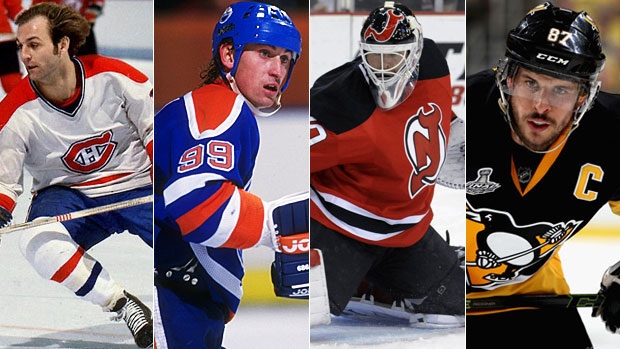 On the day the NHL completes its 100th anniversary list of the 100 greatest players in league history, TSN Hockey names the best 67 players since 1967.

The NHL unveiled the first 33 players, who played the majority of their careers prior to expansion 50 years ago, in a ceremony on New Year’s Day in Toronto.

That left 67 openings - and no shortage of candidates to fill them.

Assessing the greats of the pre-helmet era to the record-breakers of the wild and crazy high-scoring 1980s through the stars of the clutch-and-grab era to those who have stood out in the system-oriented style of today was an enormous challenge.

The resulting collection of names reads like a register of hockey nobility, players and people whose stories and feats are so familiar that they feel like Hollywood folklore.

The list includes Bobby (The Golden Jet) Hull, whose career began in 1958, and includes 11 active players. The 58 skaters on the list of 67 racked up more than 24,000 goals, 66,000 points, 33 Hart Trophies, 41 Norris Trophies and have their names etched on the Stanley Cup a combined 137 times. The nine goaltenders selected by TSN compiled 3,775 regular-season wins and 26 Stanley Cups.

Numbers aren’t everything. TSN’s list wasn’t solely based on stats and totals, but centred on selecting the greatest players, not necessarily the players who had the greatest careers. Staggeringly close calls needed to be made along the way.