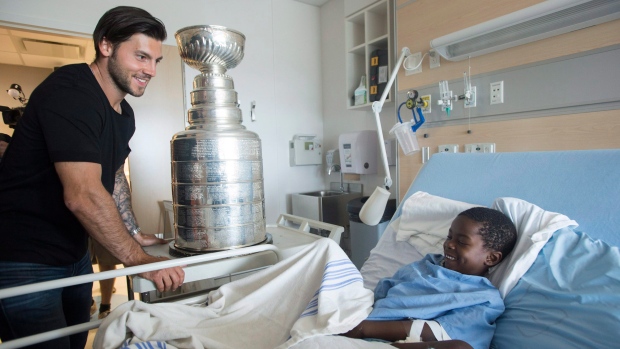 MONTREAL — A young boy toddled over to the Stanley Cup, pausing just a moment before depositing a toy airplane into the bowl of the famous trophy.

Moments later in another room of the same Montreal hospital ward, six-year-old Sarah Rochat sported a rainbow t-shirt and a huge grin as she posed for a picture with Pittsburgh Penguins' defenceman Kris Letang.

Letang, 30, spent the first part of his day with the Stanley Cup on Sunday in his hometown, where he visited children at Montreal's Ste-Justine hospital.

He spent an hour and a half chatting with patients and posing for photographs as he toured several wards.

Letang had to watch from the sidelines as his team defeated the Nashville Predators to win its second straight Stanley Cup.

The all-star blueliner has previously hoisted the cup in 2009 and 2016.

On Sunday, Letang admitted there "wasn't quite the same emotion" the third time around after missing the playoffs with a neck injury, but said he figured it was a good opportunity to give back to the children at the hospital.

"Just to have a chance to give them a smile and help them to forget their own problems, I'm taking the (opportunity) and I'm doing it."

Letang, who has struggled with injuries in recent seasons, said seeing the struggles of the children at Ste-Justine put his own health battles into perspective.

"The injury I have is nothing compared to what a four-year-old or a five-year-old has to go through every day," he said.

Letang propped the cup on a trolley as went from room to room, introducing himself to families and placing the cup next to children in their beds.

At one point, he teased a young fan of the hometown Montreal Canadiens, reminding the teen the cup hadn't been won in the city since 1993.

Letang, who played only 41 games last season, is a former Norris trophy finalist and the 26th highest-scoring defenceman on a per-game basis in league history.

He said his rehab is progressing well and he hopes to be able to play at the beginning of next season.

"I feel in full shape," he said. "I don't want to get ahead of myself, but so far all the exams and my rehab and training are going very well."