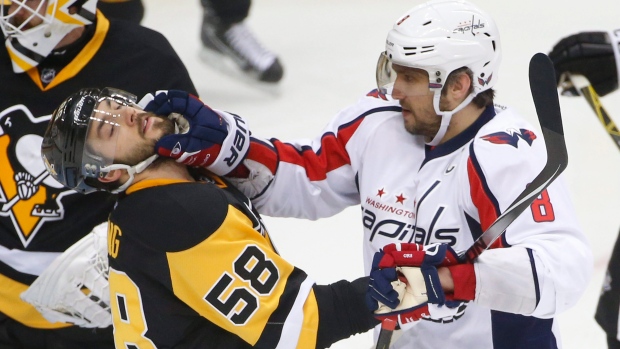 PITTSBURGH — The NHL’s biggest early-round duel in a decade was supposed to be about Sidney Crosby against Alex Ovechkin.

It was supposed to be about two hockey juggernauts clashing for Metropolitan supremacy, the exact reason the NHL moved to a made-for-TV bracket for the Stanley Cup playoffs.

Eyeballs have been glued to this marquee matchup, but all they’ve seen is a parade to the Department of Player Safety. Undoubtedly, another discipline hearing is ready to be dialed up.

Crosby has zero points in the series. Ovechkin’s Capitals now trail 2-1 in the best-of-seven setup after Matt Murray turned aside 47 saves and the Penguins escaped with a 3-2 win in Game 3 on Monday night.

Yet, discussion of defenceman Kris Letang’s playoff fate will dominate the airwaves, as the Capitals wait with baited breath to learn whether the NHL will go tit-for-tat after Letang connected with Marcus Johansson’s jaw on a high hit.

They already lost a key defenceman. Will Letang join Brooks Orpik on the naughty list for Game 4 on Wednesday night?

“The league set the standard now with (Orpik), so you’ve got to imagine it’s going to be the same thing,” Capitals forward T.J. Oshie said. “It’s late. It’s at the head. And he leaves his feet. It’s up to them, though.”

The NHL’s Wheel of Justice will spin again. As much as many will try to point to Orpik’s late hit from Game 2 as some sort of benchmark, the truth is that the two hits are unique and will be judged as such. There is no clean and simple formula to mete out punishment in a fast and fluid game where no two hits are the same.

Letang crushed a vulnerable Johansson in the middle of the ice. It was late, but not as late as Orpik’s hit on Olli Maatta, which knocked the 21-year-old defenceman out of the lineup for Game 3.

Orpik’s hit was more than one second after Maatta released the puck. Letang’s hit came 0.63 seconds after Johansson dished it, according to video dissected by TSN.

Orpik was suspended for interference. Since it was after the general standard of 0.60 seconds, Letang’s hit could also be considered interference. The lateness alone can be reason for potential supplemental discipline. Both Orpik and Letang have a suspension history with the NHL, Letang last suspended two games in Oct. 2011 for boarding Alex Burmistrov.

But that is where the comparisons end. Letang may have left his feet on the hit, his shoulder making contact with Johansson’s head. Johansson, unlike Maatta, returned to the game and appeared to be uninjured, which factors into the sentencing.

“Things happened fast,” Letang said, who received a two-minute minor on the play. “I saw him coming full speed. I tried to step up in the middle. I’m trying to make sure he doesn’t go to the net after the play. It was just a step up to hit him. There was no intention.”

Good luck explaining that to the Capitals, though.

“I didn’t see him coming,” Johansson said. “He came from the blindside. I just looked at it. He obviously leaves his feet and hits me in the head. I guess that’s the kind of plays you want out of the league. It doesn’t look good.”

When asked whether Letang deserved a suspension, Johansson replied: “Yeah, I’d say so.”

Johansson said he went through the concussion protocol and was cleared, but reported “some issues” with his neck post-game from “a little whiplash.”

Earlier in the day, Capitals coach Barry Trotz got himself into a little hot water when he implied that the Penguins received favourable treatment from the NHL since Orpik was taken out for three pivotal contests. The NHL declined to comment on Monday night through a spokesperson. Any potential fine to Trotz for his accusatory comments would not likely be announced publicly.

Trotz backed off from commenting on Letang’s hit post-game.

“I’m going to let the league handle it,” Trotz said. “I’ll just get myself in trouble if I say anything more.”

“I really don't have any interest in getting involved with this, what do I think of this hit, what do I think of that hit,” Sullivan said. “It’s a real physical series, both sides, and we can talk about these things after every game. We're just going to play. We’ll let the refs referee the game and all of that stuff will take care of itself.”

Sullivan sang a different tune on Saturday, when his player was the victim, criticizing Orpik’s blow for being late and saying it was a hit “everyone in hockey is trying to remove from the game.”

The NHL’s highest-profile showcase has devolved away from the dazzle and into discipline hearings, with each side arguing their case for cleanliness.

And the stakes could not be higher, with potentially the series swinging in the balance based on the availability of one of the game’s elite defencemen. Letang is the only player in the first three games to play more than 50 per cent of the time.

“It will be interesting how they handle it,” Braden Holtby said. “If it’s fair, he won’t be in next game. It’s one of those ones that hopefully they treat everyone the same. That’s all I can say.’’