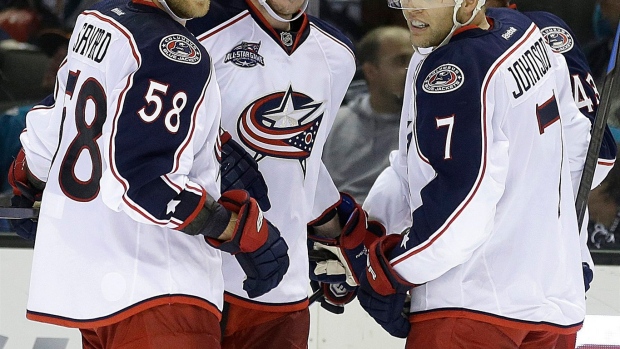 SAN JOSE, Calif. - Mark Letestu made sure the Columbus Blue Jackets' party would carry on, redirecting a shot into the net about a minute after Ryan Johansen had a potential winning goal waved off.

The visiting Blue Jackets rallied from behind twice and beat the road-weary San Jose Sharks 5-4 on Thursday night, with Letestu's goal coming with 21 seconds remaining.

"We made a great play to get the puck to the point, and I was along the side of the net and got the redirect," Letestu said. "It's a great victory now but we can spoil it in 24 hours."

Columbus will play the Ducks in Anaheim on Friday night.

Johansen scored twice and Nick Foligno's power-play goal with just under nine minutes to play tied it for the Blue Jackets, who were playing for the first time since losing at Ottawa on Saturday.

James Wisniewski's shot bounced off Antti Niemi's pads, and Scott Hartnell kicked it over to Foligno, who had the open shot.

"That was a great play by Hartsie," Foligno said. "He used his soccer skills to kick over to me."

Sergei Bobrovsky stopped 33 shots for his 99th NHL win, and the Blue Jackets improved to 4-1-1 in their last six games against the Sharks.

"This is always a hard rink to play in," Foligno said. "We got a broken play, and when you shoot the puck on goal, anything can happen."

Foligno was called for goalie interference on Johansen's negated goal, though replays showed he seemed to be clear of the play.

"When I came in to look at it, I was seeing something completely different," Columbus coach Todd Richards said. "Our guy was off to the side."

Niemi stopped 23 shots for the Sharks, who lost their third straight after just completing an East Coast swing in which they played five games in eight days.

"They were able to spend some time in our zone, and they were getting pucks to the net," Niemi said. "We need to make the simple plays, get the puck out of our zone."

Joe Pavelski had two goals, and Logan Couture and Adam Burish also scored for the Sharks.

"We made too many mistakes that ended up in the back of our net," Couture said. "We've had some spurts but the mistakes we made we've gone over for years. They're mental mistakes we need to fix."

Couture intercepted a pass from Columbus defender Cody Goloubef right in front of the net and easily beat Bobrovsky to give the Sharks a 4-3 edge with 11:37 remaining.

Pavelski scored his second of the game less than two minutes into the third period, tying it 3-3. He found a seam from the left side of the crease after taking a pass from Joe Thornton.

Burish scored his first of the season, firing a shot past Bobrovsky from the right circle about five minutes into the first period. Pavelski redirected a shot by Couture for a power-play goal late in the first to make it 2-0.

Johansen opened the second-period flurry with a backhander over Niemi's right shoulder.

NOTES: Columbus gave up its first power-play goal of the season, leaving the Detroit Red Wings as the only team with a spotless penalty-killing unit. ... The Sharks allowed their second short-handed goal of the season. ... Sharks F Patrick Marleau's assist on Pavelski's goal was the 500th of his career. ... Blue Jackets F Jack Skille played in his 200th NHL game. ... The Sharks have outscored opponents 10-1 in the first period but have allowed an NHL-high 23 the rest of the way. ... Thornton has 42 points in 37 games against the Blue Jackets.