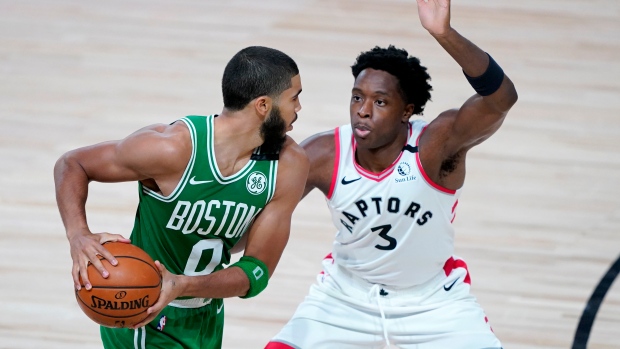 TORONTO – In their 25-year history, there are only four Eastern Conference teams that the Toronto Raptors haven’t faced in the playoffs.

Given the animosity between the clubs and their fan bases, and how competitive both organizations have been for most of the past decade, it’s surprising to see the Boston Celtics on that list.

That could change by the end of the month, and if it does, expect the matchup to be a lot more fun than it was on Friday night.

In a potential second-round series preview, the Celtics handed Toronto its first loss of the restart – and first since March 1 – with a convincing wire-to-wire 122-100 win.

The Raptors came in with a perfect 3-0 record, boasting the league’s best defence in the NBA bubble. While they fell behind early, the style of play was probably to their liking. The first quarter was a grimy, low-scoring defensive slog – the type of game the defending champs normally fare well in.

They couldn’t hit a shot but were getting good looks, and most importantly, Boston wasn’t hitting anything, either. But the Celtics’ defence got stronger as the game went on. The Raptors’ looks got worse and worse, and with that, their frustration grew.

By the second quarter they were unrecognizable. The ball wasn’t moving, they weren’t in sync and eventually they stopped defending at the level we’re accustomed to seeing from them.

A Toronto team that had held the Lakers, Heat and Magic to an average of 98.0 points on under 40 per cent shooting surrendered 122 points and allowed the Celtics to shoot 49 per cent.

"We just didn’t have a very good vibe, very [good] energy," said head coach Nick Nurse. "It was hard to score. It was one of those nights. We had [18 three-point attempts] in the first half and I’m trying to think which ones I wouldn’t have wanted us to take. There might have been one we had to throw up [at the end of the] shot clock. The rest of ‘em were pretty good and I think it hurt us that we didn’t knock any of them down. It got us a little discouraged."

There was little on the line for the Raptors, who need just one more win – or Celtics loss – to clinch second place in the Eastern Conference. They could have done it on Friday and it would have been fitting, coming against the team that’s been chasing them. But barring disaster, they know exactly where they’re going to finish. They also don’t have much left to prove until the playoffs begin on Aug. 17.

The Celtics, who have already suffered tough losses to Milwaukee and an undermanned Miami club at Disney, played like a team that was looking to make a statement.

"I saw something saying we were the last team or one of the last teams in defence in the bubble and that’s just unacceptable for us with the elite defenders that we have on this team and then just collectively with our identity and who we want to be," said Celtics all-star forward Jayson Tatum, who scored 18 points on Friday. "We’ve gotta take more pride in that. Today was a good step in the right direction."

Boston did a great job of stifling the Raptors in the half court and keeping them out of transition, where they really thrive, especially on nights when their shots aren’t falling. Jaylen Brown scored a game-high 20 points but his finest work came on the other end of the floor, as the primary defender on Pascal Siakam, who scored just 11 points on 5-of-15 shooting. Daniel Theis and the Boston bigs neutralized Marc Gasol and Serge Ibaka, who combined to score eight points on 4-of-15. Kyle Lowry and Fred VanVleet were solid but quiet and OG Anunoby was a non-factor.

The Raptors came out of the halftime break and made a brief run, cutting their deficit to 10, but the Celtics shut it down quickly.

"I think they did a great job," said Norman Powell, who scored 11 points off the bench. "They have a lot of pop to them, they came out really aggressive at the start defensively and when you come out that aggressive things start to flow for you offensively and that’s where they got their confidence early in the game."

It was an important victory for the Celtics, who only need one more win or Miami loss to clinch third place and set up a likely matchup with Toronto in the second round. First, they’ll have to get past Philadelphia or Indiana – a couple of tough teams battling for fifth and sixth place – while the Raptors will likely earn a far more favourable opening round opponent in Brooklyn or Orlando, which could be a huge advantage going in.

If these two teams do square off in a seven-game playoff series for the first time ever, it should be far more intriguing than the four-game regular season series would indicate.

The Celtics won three of those meetings – the first coming way back on Oct. 25th and the second on Christmas Day, with Toronto missing Siakam, Gasol and Powell. Even in the Raptors’ lone win, which came three days later, they weren’t fully healthy.

At it’s best, this matchup has it all – a couple of hard playing, well coached teams with deep rosters and a good mix of young guys and wily vets, both of them led by experienced point guards in Lowry and Kemba Walker, as well as budding superstars in Siakam and Tatum.

Friday’s game, which was nationally televised on TNT in the U.S., certainly didn’t showcase that but the Raptors aren’t concerned. After starting the season 5-12 against teams above .500, they had eight of their last 10 before falling to Boston.

If nothing else, they definitely didn’t tip their hand too soon.

"A little funky game for us as a whole," Powell said. "But one thing about this team is we always bounce back and always stick together so I’m not too worried."

"I hate to say it, there's nothing I really learned [from the game]," Nurse said. "The only thing I probably did learn is we've got to get a couple of our guys playing a little better, I'm not really concerned about some of the main guys, but there's a couple guys that need to play a little better since the restart and I'm glad we still have four [seeding] games to get 'em going and give them that chance. I'm not worried about their work ethic or their conditioning or some of those things, just need to get them a little more confident, have things go their way a little bit more."​