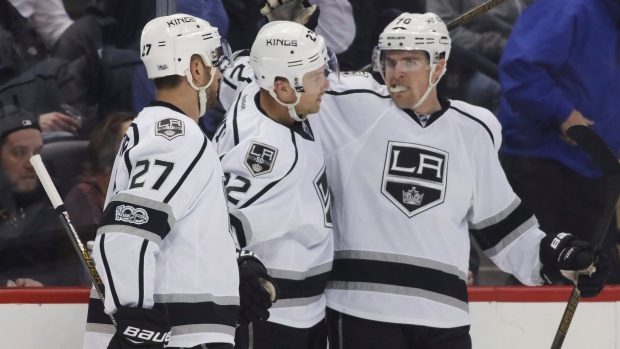 Sutter sidestepped questions about moving into a tie for most wins as coach of the Los Angeles Kings following a 2-1 victory over the Colorado Avalanche on Tuesday night.

He'd rather the spotlight shine on his players (Trevor Lewis scored the go-ahead goal with a slick move in the second period) and his goaltender (Peter Budaj stopped 24 shots) than any personal accomplishment.

"That's good," Sutter said after capturing his 215th win as L.A.'s coach to draw even with Andy Murray.

Pressed if that sort of milestone says anything, he simply responded: "Good teams. Lots of good teams. Good players."

Sutter singled out defenceman Drew Doughty, who committed a costly turnover that led to Mikko Rantanen's second-period goal, only to atone with a pinpoint backhanded pass that set up Tyler Toffoli's equalizer moments later.

"Just tells you how good of a player Drew is — he makes that mistake on their goal and comes right back and evens it up," said Sutter, whose team snapped a three-game skid. "Tells you how good he is, how passionate he is about it."

Budaj was solid against his former team, especially in the third period when he stopped all 11 shots he faced. Budaj picked up victory No. 27 this season, his most since winning 31 with Colorado in 2006-07.

He also had some assistance from the posts.

"Four or five times," Budaj said. "A couple times pretty heavy. ... Sometimes you get the bounces, so it's great."

The Avalanche pulled goaltender Calvin Pickard with around 1:55 remaining but couldn't capitalize, dropping to 1-6-1 over their last eight games. Tyson Barrie hit the post with about seven minutes remaining in the third period.

"We just weren't sharp enough around the net and it ended up costing us," Avalanche captain Gabriel Landeskog said.

Another close encounter with a team fighting for a playoff spot.

"It's a fun challenge for us to try and play a spoiler role," Landeskog said. "At the same time we're trying to polish up our game and our systems coming into next year, because that's really what we're preparing for, making sure we're bettering ourselves for next year."

Rantanen gave the Avalanche a 1-0 lead 32 seconds into the second period when he stole the puck from Doughty at the blue line and beat Budaj with a shot into the upper corner. Rantanen has goals in three straight games.

Los Angeles responded by scoring twice in a span of 6:14. Toffoli scored on a nifty pass from Doughty just before being shoved into the net and knocking the goal all the way into the boards.

After an Avalanche turnover, Lewis glided down the left side, cut toward the middle with Barrie chasing him and pushed the puck past Pickard to make it 2-1.

"We were talking before the game we need to win some games and kind of get a streak going so we can get in the playoffs here, and be comfortable and not be waiting until the last game of the season," Toffoli said. "It was a big game for us tonight."

Los Angeles was called for two penalties in the first period, leading to a pair of quality scoring chances for Colorado. On one, Landeskog kept poking at the puck down low as Budaj turned him away repeatedly until the net finally dislodged. On another, Rantanen had an open net, but Budaj slid over to deflect the shot away.

"It's always fun to play here," Budaj said. "It's a great building, too. I enjoy coming back here."

NOTES: Sutter tied Jacques Lemaire (1,262) for 13th on the all-time games coached list. ... Los Angeles goaltender Jonathan Quick (lower-body injury) faced some shots during the morning skate. He's been sidelined since being injured in the season opener. ... Colorado will be without hard-hitting defenceman Nikita Zadorov for the rest of the season after he broke his ankle Monday at practice. ... D Erik Johnson is nearing a return after being sidelined since early December with a broken leg.

Avalanche: At Nashville on Thursday.