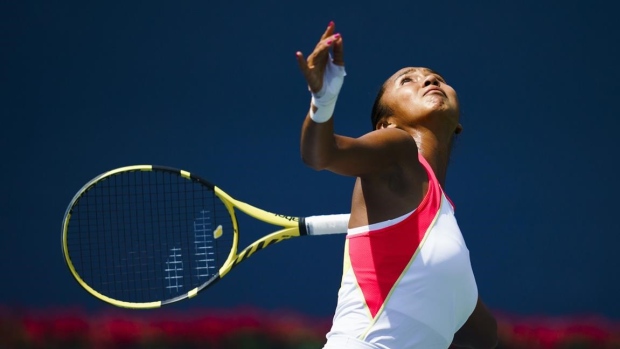 KRALJEVO, Serbia — Canada has a 2-0 lead in its Billie Jean King Cup playoff tie against Serbia thanks to a display of mental toughness from Rebecca Marino and Leylah Annie Fernandez.

Marino gave Canada a commanding 2-0 lead Friday with a 6-4, 7-6 (6) upset win over Nina Stojanovic. Marino said she was tested in a wild second set that included five breaks of serve.

"It was frustrating and exciting at the same time to be breaking serve but also to be getting broken, but you've got to hang in tough in sets like that," Marino said.

"She's a great player and I knew that if I could just keep trying, and do my best no matter what, I might be able to squeak it through, and that's kind of what happened."

Canada now needs just one win in three matches on Saturday to clinch the best-of-five tie.

Marino, ranked 230th, recorded her first win over a top-100 opponent since September 2018 when she knocked off world No. 87 Stojanovic.

It didn't come easy, as Marino missed her first match-point chance while up 6-5 in the second set, then two more in the tiebreak before putting Stojanovic away.

"I knew that most likely I would have another opportunity at some point, so I was trying not to be too down on myself," Marino said of the missed match points. "I've played other matches where that's happened and you kind of have to pick yourself back up."

"I was proud about my fighting spirit," she added. "It would have been easy for me to just throw in the towel, but when it started getting tough I really hung in there."

Marino, from Vancouver, finished with 18 winners, nine more than her opponent.

"My serving was super-clutch today," she said. "I felt like my first serve was a really strong weapon for me. "

Fernandez, the top-ranked singles player in the indoor hard-court-tie at No. 72, faced a different struggle as she faced an opponent on top of her game and needed two hours 34 minutes to finish off the 162nd-ranked Danilovic.

The Canadian broke Danilovic in the final game to win a match in which she said she was not at her best.

"She played an incredible match, I didn't," Fernandez said. "I made one too many mistakes, giving her back the points that I won and she took advantage.

"But I was happy that I was able to fight through it and get the win for my team."

While Fernandez was not pleased with her overall performance, she delivered when the match presented her with opportunities to take control. The 18-year-old from Laval, Que., won six of seven break-point chances. Danilovic was good on just five of 14.

"I was more focused and I was going for it a little bit more (on break-point chances)," Fernandez said. "But honestly I was just trying to think of it as another point and just do what I've been practising.

"It's tough playing the first match as the No. 1, nerves can get to you," El Tabakh said. "But (Fernandez is) tough and she was able to pull it off. And I feel like Rebecca was inspired by that performance and came out playing really well."

The winner of the best-of-five tie advances to next year’s qualifiers and the loser drops into the Regional Group I.

The Billie Jean King Cup is the new name for the Fed Cup — the top international team tournament in women's tennis.