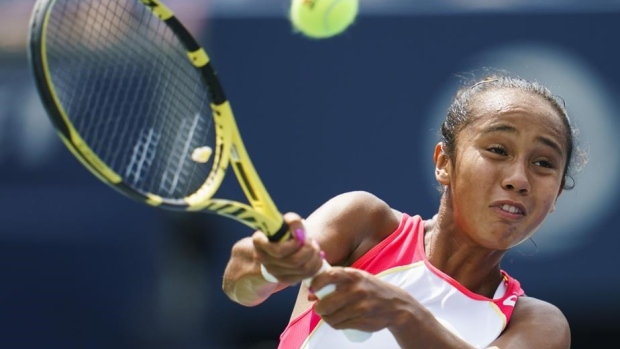 Fernandez, ranked 72nd in the world, was about to have her fifth match-point opportunity against the 87th-ranked Stojanovic when some of the lights went out at the indoor hard-court facility.

Stojanovic, with serve and trailing 5-4 in the third set, came back from the 13-minute delay to win a long point. But Fernandez won the next two points to finally put an end to a match that lasted two hours 46 minutes.

"I think it was just trying to trick myself that it wasn't match point for me, that I wasn't up in the third set," Fernandez said of her attitude after the lights went off. "It was more, let's earn this point, thinking it's 0-0 or that I'm down in a set trying to get back into it. Just fight for every point."

"Honestly very proud of myself that I was able to push through the nerves of this match," Fernandez said. "I knew it was not going to be easy."

It was the second long match in a row for Fernandez, who needed two hours 34 minutes to beat Olga Danilovic 7-5, 4-6, 6-4 in the Friday's opener.

Fernandez is in the midst of a promising year, having won her first career WTA Tour title last month in Mexico.

"It's definitely a big confidence boost. It helps a lot," she said. "It wasn't an easy start of the year for me but I kept training, kept improving and I was happy to get my first title a few weeks ago in Mexico. And here to be playing for my country, getting those emotions, the support from my teammates ... from our country was tremendously helpful. Just to win this weekend was great for my upcoming season."

Canada advances to next year's qualifiers, where a win would secure a berth in the 2022 Billie Jean King Cup Finals.

The Billie Jean King Cup is the new name for the Fed Cup — the top international team tournament in women's tennis.

This report by The Canadian Press was first published April 17, 2021.