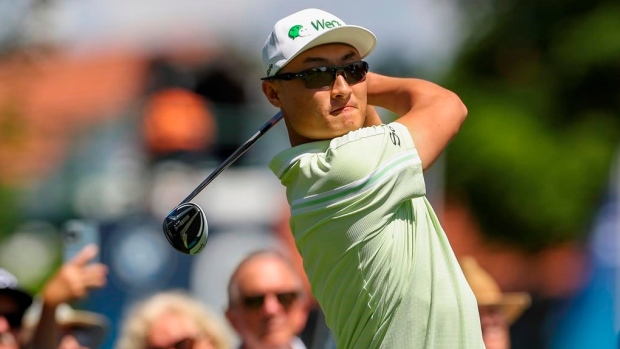 MUNICH (AP) — Li Haotong shot 10-under 62 to lead after the first round of the BMW International Open on Thursday as the European tour continued to allow players from the breakaway Saudi-backed LIV series to compete.

Li tied the course record, finishing the round with his second eagle of the day on the par-5 ninth hole after a big approach shot left him a 4-foot putt.

“It’s just been an incredible day for me. I didn’t expect that because I spent a couple of weeks off in Dubai, which was hot, didn’t practice much,” Li said. “It’s just helped me mentally cool down a little bit. Low expectations, no expectations, just play golf and enjoy every shot.”

The Chinese player leads by one stroke from Daan Huizing and two from third-place Nicolai von Dellingshausen. Li was also tied for the first-round lead at his last tournament, the European Open, before fading to finish tied for 18th.

Former major winners Sergio Garcia, Louis Oosthuizen and Martin Kaymer were among the players signed to LIV to tee off Thursday in the first European tour event to start since the PGA Tour said June 9 it would suspend any of its players who join LIV.

Kaymer was the best of the LIV players Thursday, finishing as one of six players tied for fourth on 6 under, four strokes behind Li. Oosthuizen was on 2 under and Garcia 1 over.

Germany's Maximilian Kieffer delighted the home crowd with an albatross on the par-5 11th, finding the pin with a 211-yard approach shot out of the rough, and ended the day on 4 under.

“It came off great, looked good in the air. I didn’t see it but when you heard the people behind the green, you knew it was in. It was a great feeling,” Kieffer said.