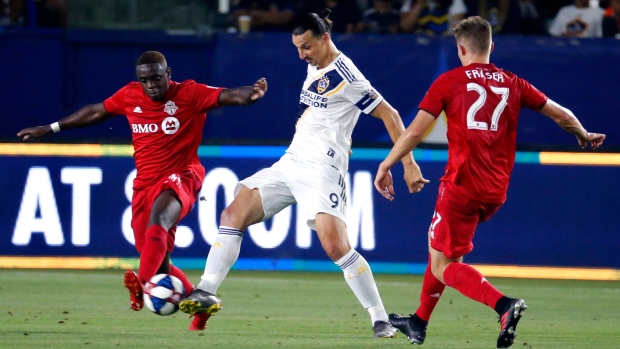 It's been three months since the 21-year-old last started in MLS play. He has not seen the field since in league action, making the matchday 18 just twice since that 3-1 loss to Houston on July 20.

Not that Fraser is complaining.

He understands playing time is hard to come by when you're behind Michael Bradley on the depth chart. But he believes he is more than ready for his close-up.

"I feel I'm able to be patient because the times when I'm not playing, I'm still learning a lot," he said. "So it's not like I'm standing still. I'm still moving forward a bit and learning from Michael and learning from other players in the team and the coaching staff.

"I would never say I'm stagnant, I'm not doing anything. But again it is hard not getting those opportunities sometimes when I feel I deserve them. But it's the life of a footballer. It's the life — ups and downs."

Fraser and Toronto FC were in New York City on Wednesday for the MLS Eastern Conference semifinal at Citi Field against NYCFC.

Fraser had an evening to remember Oct. 15 when Canada hosted the U.S. in CONCACAF Nations League play at BMO Field. Starting on the bench, Fraser was called into action in the ninth minute when Mark-Anthony Kaye was injured.

He made his Canadian debut in style before family and friends in his hometown, coolly fitting in alongside Samuel Piette and helping stifle the Americans in a memorable 2-0 win

"Liam slid into that (midfield) role and looked very comfortable ... I thought it was an excellent performance," said Vanney. "He's not a kid who's short of confidence so it's not like the scenario was going to be big for him. He believes heavily in himself.

"I thought he stepped in and did a great job."

Fraser is a cool customer on and off the pitch. Blessed with fine vision, the defensive midfielder is excellent at distributing the ball.

"My dad really pushed (me) on being a guy who everybody else can rely on and not lose the ball ... He really pushed me on becoming a great passer," he said.

Fraser credits Bradley for helping him learn his position and speaks highly of the skipper's mentality and leadership abilities. But it's clear he's champing at the bit.

Born in Toronto, Fraser moved to Vancouver with his family when he was eight or nine. He spent six years with the Vancouver Whitecaps residency program before returning to Toronto in 2013.

Fraser doesn't offer much about his time in the Whitecaps organization, saying: "It was all right."

But pressed, he spills.

"They never gave me the opportunity I felt I deserved there and I think a lot of people over there tried taking credit for something I don't think they built up at all ... Last time I went to Vancouver I had a couple of people, part of the (Vancouver) organization — I won't name anyone — say 'Oh, it was great to see a Whitecaps product.' And I said 'You guys didn't give me nothing.'"

He believes the Whitecaps, while giving him a chance to play in his own age group, "never pushed me for that next step."

"I owe everything to Toronto FC and the people that gave me opportunity here," he said.

As a result Fraser looks forward to games against the Whitecaps. "I love them."

Armed with a good reference from former Toronto and Vancouver staffer Stuart Neely, Fraser joined the TFC academy after a successful trial. Working under Anthony Capotosto and Mike Stefano, he climbed the ranks to the senior academy team and signed with TFC II under Jason Bent in February 2016.

In early 2017, he captained Canada in CONCACAF U-20 World Cup qualifying play. Fraser, then 19, signed with the Toronto first team in January 2018 as a homegrown player after 52 appearances with TFC II.

Last season, he made 10 appearances with seven starts. This year, he made nine regular-season appearances (all starts) with seven of those coming in a row, from late May to early July while Bradley was away at the Gold Cup.

He dressed for last Saturday's playoff win over D.C. United but did not see action.

Fraser says he will remember his Canadian debut for the rest of his life and hopes his performance made an impression for both club and country.

He says Canada has a chip on its shoulder. As he does.

"I'm in such a kind of unique situation having Michael there and feeling like I deserve more playing time than I've been getting this year. Again that decision is up to the coach and I respect the coach's decision. But I think it is something I've been wanting to prove for these last two years that I have that ability to start for an MLS team and play a consistent season at peak performances.

Asked if he may have to go elsewhere to get his playing time, he pauses.

"I think (the goal is) just making sure I just become the best footballer that I can be, because I know I can take it to another level. Obviously that comes with big game time and playing time. But I have that ability. So if it's Toronto, if it's somewhere else, I'd love for it to be Toronto. But if it's somewhere else that'll allow me to become the best footballer and keep learning and allow me to push boundaries ... then wherever it takes me

"But for now, I'm just focused on the (next) game and the playoffs."

Fraser says the club has been open towards him when he seeks direction about his future.

"That's never guaranteed in football — to always get that answer you want to hear. It's just about kind of keeping your head down and realizing that the opportunity will come."

Fraser counts teammates Ashtone Morgan and Jonathan Osorio for "massive, massive roles" in helping him on and off the field. The bond is clear with the two he calls his big brothers.

He even served as a ball boy at a TFC game "way, way back" that Morgan played in.