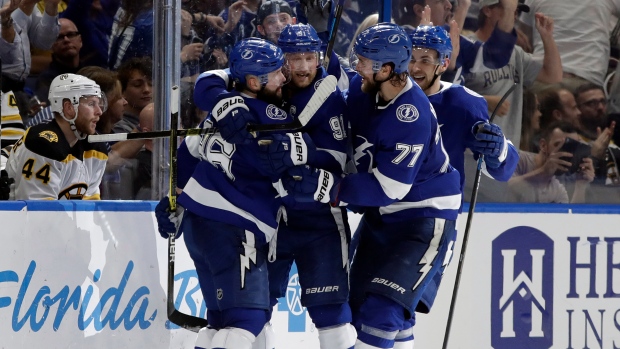 TAMPA, Fla. — With five games left in the regular season, history is the only thing the Tampa Bay Lightning have to play for. The NHL's best team is still plenty motivated.

Steven Stamkos scored twice and finished with four points, and the Presidents' Trophy-winning Lightning became the fourth NHL team to win at least 59 games in a season, rallying from two goals down to beat the Boston Bruins 5-4 on Monday night.

"Our mindset is to win each and every night," said Stamkos, who reached the 40-goal mark for the fifth time in his career and the first time since 2014-15. "I think we try to give ourselves a chance, and I think we have this entire month with pretty much knowing where we are going to finish in the standings now for a while. That says a lot about our group."

Anthony Cirelli scored his 18th goal of the season with 52.4 seconds left in the third period to complete the comeback for Tampa Bay. Victor Hedman and Nikita Kucherov also scored in the third for the Lightning, who improved to 9-11 this season when trailing entering the final period.

Cirelli scored the winning goal after finding a soft spot in the slot and getting off a one-timer from a pass by Mathieu Joseph.

"We just go out there and play," said Cirelli, who set a franchise record with his fifth game-winning goal as a rookie. "We never give up, we just keep going and we have the skill to put up goals. We saw that in the third period."

The Bruins, whose four-game winning streak ended, scored three times in the span of 5:50 in the second period on goals from Brad Marchand, Brandon Carlo and Charlie Coyle. Marchand also scored in the first period. Tuukka Rask finished with 23 saves.

"That's a team that's been doing that to a lot of teams this year, being down and getting back in games, especially in the third," Boston centre Patrice Bergeron said. "We've seen it before so, you know, we've got to be better."

Boston was caught on odd-man rushes on Tampa Bay's third and fourth goals. Carlo missed high on an open look from the slot and Vasilevskiy stopped David Pastrnak with a toe-save with the rebound going to Stamkos, who sprung Kucherov for a 2-on-1.

"We had a chance to put the game away. We're off net with our chance, we've got the hustle back," Boston coach Bruce Cassidy said about Tampa Bay's third goal. "The lone (defenceman) that was back there just made a poor decision. He's got to buy time for people to recover. That gave them life, unfortunately."

NOTES: Lightning D Dan Girardi missed his ninth consecutive game with a lower-body injury, and coach Jon Cooper said Girardi is unlikely to return before the playoffs. ... Tampa Bay D Anton Stralman (lower body) participated in Monday's morning skate and could return by the weekend. ... Boston LW Marcus Johansson (lung contusion) missed his 10th consecutive game, but Cassidy said a return on Wednesday is likely. ... Bruins D John Moore left in the first period after he fell awkwardly into the boards and did not return. ... Tampa Bay LW Ondrej Palat left in the first period and did not return after suffering an undisclosed upper-body injury. ... Lightning RW Ryan Callahan recorded his 200th career assist. ... Kucherov's 121 points are the second most in NHL history by a Russian player in a single season. ... Tampa Bay is the first team since Ottawa and Atlanta in 2005-06 to have three players reach 90 points in a season (Brayden Point, Stamkos and Kucherov).