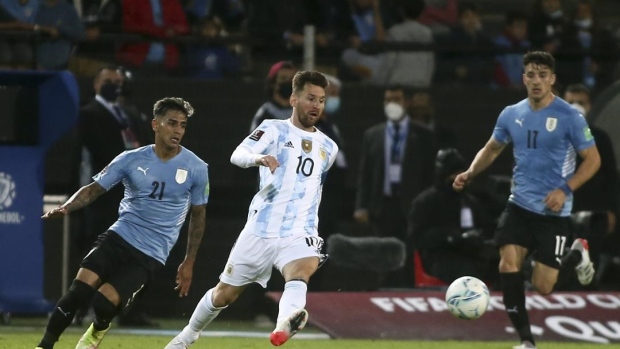 BUENOS AIRES (AP) — Lionel Messi will play for Argentina when they face Brazil on Tuesday in a World Cup qualifier missing Neymar because of left thigh pains.

Messi, who has been bothered by a knee injury, will play in San Juan in a match that could earn the team a spot in next year’s World Cup, Argentina coach Lionel Scaloni said Monday.

Hours later, the Brazilian Football Confederation said in a statement that Neymar “reported being insecure" about the possible injury.

“Because there's not enough time to perform more exams, the coaching staff decided to spare the player, who will not travel with the squad,” the statement said.

Neymar's friend and rival, Messi, played only 15 minutes in Argentina’s 1-0 victory over Uruguay on Friday. He also missed two Paris Saint-Germain matches because of the injury.

“A few days ago he was physically fit and at the end we decided that the best would be for him to play for a few minutes so he starts getting that good feeling,” Scaloni said. “For tomorrow (Tuesday), it is confirmed that he will play. We hope he finds himself in a good place.”

The Argentines, second in the 10-team South American standings behind Brazil, can qualify with a victory. Brazil already has one of the four automatic qualifying spots from the region.

Brazil has not won in Argentina since 2009.

Scaloni’s main concern is in the midfield. Leonardo Paredes is recovering from an injury and could once again be replaced by Guido Rodríguez.

Beside Neymar, Brazil will be missing the suspended Casemiro, who could be replaced by Fabinho. Coach Tite also expects to test other players after beating Colombia 1-0, possibly using Matheus Cunha up front instead of Gabriel Jesus.

In September, the qualifier between the teams was suspended after seven minutes because Argentina broke COVID-19 protocols. FIFA still has not announced what it will do with that match.

“I regret that match did not take place,” Tite said Monday, speaking before Neymar's injury was announced. “(Tuesday) is a World Cup match for us, like the Colombia match was. Everything else will be secondary due to the greatness of this encounter."