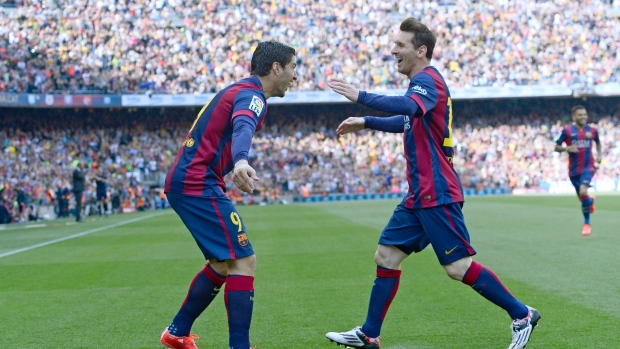 Lionel Messi did not want to take Barcelona to court to force his way out of his contract, but he’s taking them to the court of public opinion once again, this time over the departure of Luis Suarez from the club.

New head coach Ronald Koeman told Suarez that he is no longer part of the club’s plans and Barcelona has agreed to a deal to transfer the 33-year-old to Atletico Madrid.

"It will be strange to see you in another shirt and even stranger to play against you," Messi posted on Instagram. “You deserved to depart for who you are: one of the most important players in the club's history, winning things as part of a group and individually. Not for them to kick you out as they have done. But the truth is nothing surprises me anymore."

Following the conclusion of the season, which was delayed due to the COVID-19 pandemic, Messi attempted to execute a clause in his contract that allows him to become a free agent each year. However, both Barcelona and La Liga said that the move would not be allowed because the May 31st date for the clause is ironclad and the window to opt out had closed.

The buyout clause on Messi’s contract is €700 million.

"I'll continue at Barcelona and my attitude won't change, no matter how much I have wanted to go," Messi told Goal.com after deciding against the court case. "I told the club and the president (Josep Maria Bartomeu) that I wanted to go. I've been telling him all year. I thought my time in Barcelona was over, sadly - I always wanted to finish my career here."

Messi was reportedly link to a move to Manchester City to reunite with former manager Pep Guardiola.