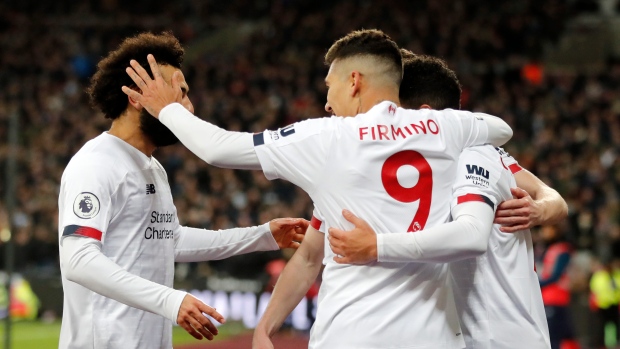 LONDON — Mohamed Salah scored a penalty and set up Alex Oxlade-Chamberlain's goal as Liverpool beat West Ham 2-0 Wednesday to go 19 points clear at the top of the Premier League.

The game had been postponed in December because of Liverpool playing in the Club World Cup in Qatar, a trophy which joined the European Cup from last season in the Anfield trophy cabinet.

Now it seems a matter of when — not if — Liverpool ends its 30-year English title drought given the team's commanding lead with 14 games remaining.

West Ham, meanwhile, is only above the relegation zone due to having a better goal difference than Bournemouth.

Liverpool's breakthrough in east London came when Salah netted a penalty in the 35th minute after Issa Diop fouled Divock Origi. Salah's pinpoint pass with the outside of his boot then set up Oxlade-Chamberlain to slot in the second in the 52nd.

Trent Alexander-Arnold volleyed against his own post and Liverpool goalkeeper Alisson kept out Declan Rice's header but West Ham couldn't find a way back into the game.

“The difficulty tonight was to get the rhythm, keep rhythm and to stay concentrated,” Liverpool manager Jürgen Klopp said. "It's normal you don't always perform to the highest level ... but it was more than good enough to win this game."

Liverpool has now beaten all 19 teams in the league at least once this season.