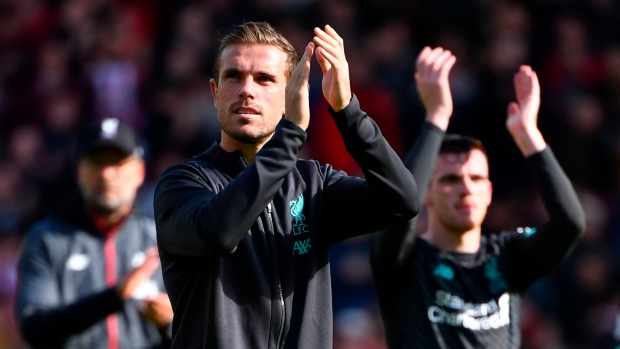 If Premier League champions Liverpool are to break Manchester City's single-season points record, they will have to do so without their captain.

Manager Jurgen Klopp announced on Friday that Jordan Henderson will miss the Reds' final four games with a knee injury.

Henderson, 30, picked up the injury during the team's 3-1 win over Brighton on Wednesday, limping off in the late stages.

"It was an awful moment when he went down and left the pitch," Klopp said. "Hendo is an animal, he fights with everything. So he can really deal well with pain. At this moment he knew something had happened. It was a complete mood killer."

Still, the injury will not stop Henderson from lifting the Premier League trophy after the Reds' final home match of the season on July 22 against Chelsea.

The England midfielder made 30 appearances for the Reds in the league this season, scoring four goals. Henderson is a leading contender to be named the PFA Player of the Year, given to the Premier League's most valuable player. Teammate Virgil van Dijk was last year's winner.