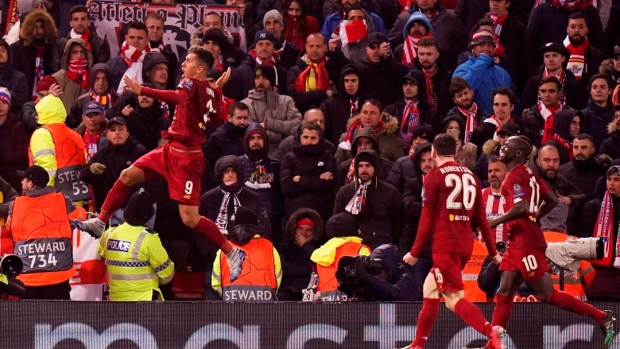 MANCHESTER, England — Liverpool could end its 30-year title drought at home after all when the English Premier League resumes after the pandemic-enforced suspension.

Police originally indicated they wanted the club’s second game after the restart against Crystal Palace to be at a neutral venue because of concerns that supporters could congregate outside Anfield, while they are prohibited from being inside. But the game on June 24 is scheduled at Liverpool’s home stadium.

The Merseyside derby at Everton could still be played away from Goodison Park on June 21, with the venue yet to be confirmed.

Liverpool leads second-placed Manchester City by 25 points and is two wins from winning the title.

Jürgen Klopp's side could clinch the trophy in its first game back against Everton if City loses to Arsenal on June 17. Before that 1915 GMT kickoff in Manchester, a game between Aston Villa and Sheffield United will mark the return of the league from its 100-day coronavirus shutdown in a 1700 GMT kickoff.

A reconfigured Premier League schedule released on Friday initially sees 32 games in 16 days— only two days will be without any action.

Every game will be shown live in Britain — many for free in an unprecedented move — because fans will not be allowed at games for the remainder of the season, which is due to end on the final weekend of July. Pubs are also due to remain closed in England until at least July.

Sky Sports and BT Sport, who are the main domestic rights holders, will offer fans the option of watching games with pre-recorded crowd noise to cover the silence from stadiums. Sky Sports will have team-specific audio from FIFA video game producer EA Sports.

There will also be new online services to link up housebound fans in video chats alongside game feeds: Watch Together on BT and Fanzone on Sky.

“With live sport on hold for over two months," Sky Sports managing director Rob Webster said, “we’ve spent a lot of time thinking about how we broadcast in new ways to bring fans together, even if they can’t meet up to watch the match.”