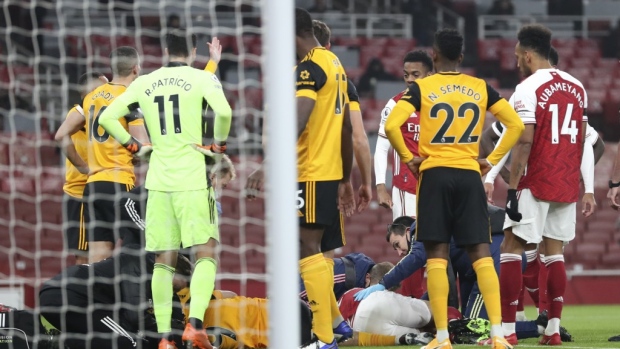 After Sunday's coming together of heads between Wolves forward Raul Jimenez and Arsenal defender David Luiz resulted in a fractured skull and surgery for the Mexico international, Liverpool manager Jurgen Klopp says it's time to take more concrete action when it comes to concussions, including introducing a substitution rule to ensure players are properly treated for concussions.

Klopp says he was horrified to see Sunday's incident in which the two men knocked heads early on in Wolves' 2-1 victory during an Arsenal corner. Jimenez was given oxygen on the pitch before being stretchered off, while Luiz finished the rest of the first half, but did not come out for the second half. Jimenez later required surgery for a fractured skull.

"At that moment I didn't think about a rule change, I was just sitting there for 10 minutes hoping that they would both get up without any issues, but that didn't happen," Klopp said at a press conference ahead of Liverpool's Champions League encounter with Ajax at Anfield. "I hope Raul Jimenez is as good as possible now, I heard he had surgery. I wish him and David Luiz all the best. I know we have concussion protocols and I'm pretty sure Arsenal did that. I'm not sure any rule would help in that moment because the player can play on. But, yes, it makes sense that we can do things like this, of course."

According to current FA protocol, a player who is suspected to have a concussion should be removed from the pitch immediately and not allowed to return until the appropriate treatment has been administered.

Newcastle and England legend Alan Shearer says that this course of action is insufficient.

"Football needs to get real, it needs to wake up, it needs to get serious," Shearer told the BBC's Match of the Day. "Not next year, next month, now. It is not acceptable, it has been going too far too long."

Shearer was aghast that Brazil international Luiz was allowed to return to the match at all.

"If David Luiz has passed all the protocols like Arsenal say he has, how on earth is he allowed back on to the pitch with a wound that is dripping down his face?" Shearer said. "We're talking about players' welfare here. Football's protocols allow someone who has a cut that is seeping through a bandage that has just been put on to carry on playing and then he has to go off again 20 minutes later because he can't head a ball... We're talking about life and death and players' careers ending."