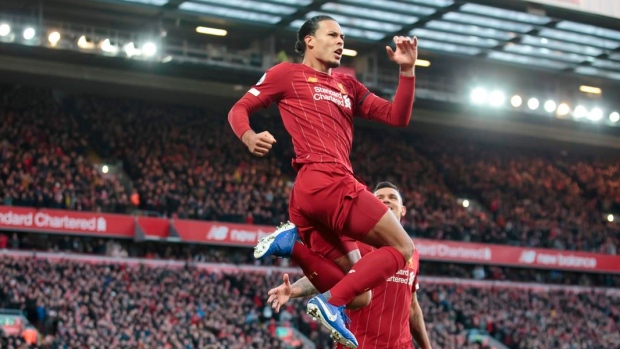 LIVERPOOL, England — Liverpool's hopes of retaining the Premier League title took a major hit Sunday when the champions announced Virgil van Dijk requires surgery on his right knee after damaging ligaments in a challenge by Everton goalkeeper Jordan Pickford during the Merseyside derby.

Liverpool did not give a timescale on Van Dijk's absence, but an injury of that nature will likely keep the Netherlands international out for a long period.

“Following surgery,” Liverpool said, “Van Dijk will begin a rehabilitation program with the club’s medical team to enable him to reach full fitness as soon as possible.”

Van Dijk was the subject of a reckless, knee-high lunge by Pickford in the sixth minute of the 2-2 draw at Goodison Park on Saturday. The centre back immediately came off after lengthy treatment and hobbled gingerly around the field to the locker room. It meant English soccer’s player of the year from 2018-19 missed his first minutes of league action since September 2018.

Van Dijk has been a commanding presence at the heart of Liverpool’s back line throughout the team’s rise to the top of English and European soccer in recent years. Liverpool has conceded the fewest goals of any team in each of the last two Premier League seasons.

Without its best defender, Liverpool manager Jürgen Klopp has two specialist centre backs in Joel Matip — who has recently returned from injury — and Joe Gomez, who has struggled for form this season.

Fabinho, a defensive central midfielder, can also drop back to play at centre half if necessary.

Liverpool also is currently hampered by the loss of its first-choice goalkeeper, Alisson Becker.

The games are coming thick and fast for the team, which starts its Champions League group-stage campaign on Wednesday with a trip to Ajaxe. There are group games in successive midweeks until the next international break in mid-November.

Liverpool has 10 points from a possible 15 after the opening five games of its title defence, and lies three points behind first-place Everton.