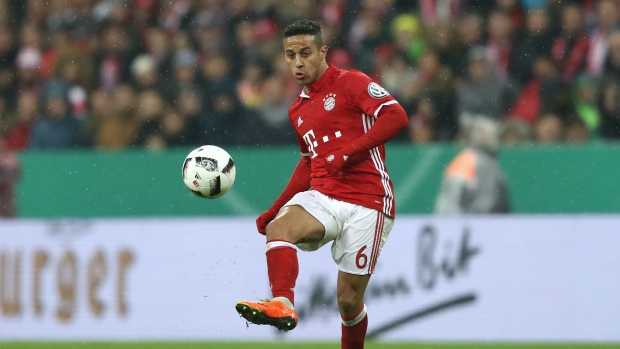 “That was Thiago’s great wish,” Bayern chairman Karl-Heinz Rummenigge said on Thursday in a video interview with German newspaper Bild. “It was his great wish, quite simply, to do something new before the end of his career.”

The Spain midfielder won seven consecutive Bundesliga titles with Bayern and the Champions League last month. His contract with the Munich club was due to expire at the end of the 2020-21 season.

Liverpool manager Jürgen Klopp said last week that Thiago Alcantara was a “really good player" when commenting on the club's reported interest in signing him.

“I can only congratulate Kloppo, he’s got a top player and a sensationally good person,” Bayern coach Hansi Flick said.

Flick added he tried and failed to persuade Thiago Alcantara to stay, and “it was very emotional today when he said goodbye.”

Rummenigge said Bayern would primarily use the money from the sale to cope with the “great financial challenge” posed by the coronavirus pandemic. That includes a lack of matchday revenue after the mayor of Munich barred fans from Bayern's opening Bundesliga game on Friday.

However, Flick said he was in talks with club management about bringing in new signings before the transfer window closes on Oct. 5.

“We have lost another quality player,” Flick said Thursday.

Besides Thiago Alcantara, Bayern has also parted with the on-loan trio of Philippe Coutinho, Ivan Perisic and Alvaro Odriozola. Of four signings, only Leroy Sané appears likely to play a large proportion of games.