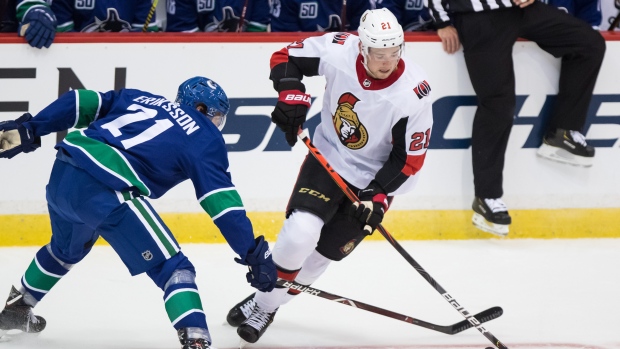 Pierre Dorion was given the perfect platform on Monday morning to express his disappointment in Logan Brown.

The Ottawa Senators general manager has never been one to mince words, but during an extended interview on TSN 1200 in Ottawa, Dorion refused to send a stern message to the centre, who was amongst the team’s final training camp cuts on Sunday.

Instead, the general manager used a significant portion of the segment to laud the development of the 21-year-old, who very much remains in the picture for the organization.

“Not at all. For us, it’s progress,” Dorion said when asked if he was disappointed in Brown’s training camp. “We know he’s knocking on the door. We know if one of our four centremen go down we can just put him in the lineup. There’s no disappointment. There’s progress.”

“One thing about this camp,” Dorion added later, “Logan Brown opened a lot of eyes.”

Patience is the operative word in the Senators’ rebuild and Brown is the personification of that process. The organization has been accused in the past of rushing along their prized prospects and tossing them into unfair situations.

Perhaps the handling of Curtis Lazar is now serving as a cautionary tale for the Senators as they proceed slowly with Brown.

In 2014-15, the Senators rushed Lazar into the NHL – as they opted to shoehorn the 19-year-old into an opening as a fourth-line winger rather than let him develop naturally as a centre in the AHL.

The result was a player who completely lost his confidence in the offensive zone in the NHL and had a needless identity crisis by the time he was 21.

Speaking to reporters last week in Buffalo, Lazar acknowledged that his game did not progress simply because he was playing in the NHL.

“I just kind of stayed afloat on the fourth line,” Lazar said.

The Senators want to avoid a similar trajectory with Brown. He did play a portion of training camp as a fourth-line left winger, but that was never truly an option the club contemplated to start the 2019-20 season.

“Whether it was going to be playing a fourth-line role, we just felt that for his development and the best thing for him – part of our vision to have success two or three years down the road ­– was for him to develop his craft in Belleville and dominate,” said Dorion.

The Senators moved up in the 2016 NHL Draft to select Brown 11th overall, believing he had all the attributes to project into a No. 1 centre down the road — size, skill, soft hands and vision.

More than three years after drafting him, Dorion believes Brown still remains the club’s best prospect to project into the next Jason Spezza.

“When it comes to Logan Brown, we don't have a more talented centreman in our organization,” Dorion said adamantly.

Of the three players re-assigned to Belleville on Sunday – along with Vitaly Abramov and Christian Jaros – Brown was purported to be the most upset with the demotion. But after a positive 20-minute conversation with assistant general manager Peter MacTavish on Sunday, Brown was able to digest the news with a little more optimism.

“He understands the process. Through this rebuild, not every young player is going to be put into the lineup immediately,” Dorion added. “We don’t want Logan Brown coming into our lineup losing his confidence and not being the player we want him to be in a year from now – when we really need him.”

Dorion refused to put a timeline on when Senators fans should expect to see Brown in the NHL. As it currently stands, the club has four legitimate centres in Colin White, Chris Tierney, Artem Anisimov and Jean-Gabriel Pageau. An injury to one of those four would likely culminate in Brown being recalled to the NHL, but it’s also worth noting that Pageau and Tierney are free agents at the end of this season. Either or both could become trade chips if they don’t sign contract extensions, possibly providing another avenue for Brown to reach the NHL this season.

“For a 21-year-old bigger body going back to the American League, whether it’s for a month, three months or maybe it's the whole year, we know we have a special talent in Logan Brown,” said Dorion.

It’s a safe bet that when Brown is recalled by the organization – whether it’s in October or March – he will no longer be riding a constant shuttle on the 401 between Ottawa and Belleville. When he is back up in the NHL, it’s likely a permanent stay as one of the club’s top centres.