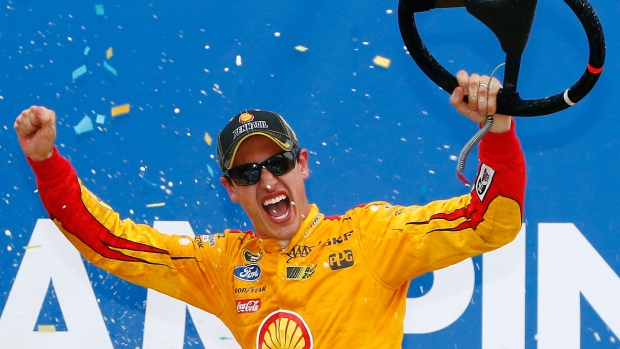 Several competitors accused Harvick of intentionally causing a race-ending caution Sunday at Talladega Superspeedway, where Logano completed a sweep of the second round of NASCAR's playoffs.

It came at the expense of Dale Earnhardt Jr., who was eliminated from the Chase for the Sprint Cup championship at his best track for the second consecutive year. Earnhardt led a race-high 61 laps, but had to settle for second in a race he had to win when the Harvick-triggered crash ended the race under caution.

NASCAR's most popular driver did not question his fate.

"When the race is over, I can live with the result as long as everyone else is going by the same rules," Earnhardt said. "I felt like per the rule book, it sorted out and I finished second. I'm OK with that."

NASCAR said this week it would make just one attempt at Talladega to finish the race under green instead of the usual three tries in a nod toward creating a safer racing environment. Drivers were almost unanimous in their support of the change, even when it came into play in a race that cut four drivers from the Chase field.

Eliminated Sunday were Earnhardt, Ryan Newman — the runner-up to Harvick last year — and Joe Gibbs Racing drivers Matt Kenseth and Denny Hamlin. JGR was considered a heavy favourite in this Chase after a dominating regular season, but had two of four drivers eliminated Sunday and both were furious with Harvick.

Harvick had radioed to his crew under caution that a mechanical issue was preventing him from accelerating. But if he moved out of the way, he risked falling to the back of the field and potentially being knocked out of the Chase.

So he instead stayed put, and when his car failed to take off on the restart, he hit Trevor Bayne as Bayne tried to dart around him and it triggered a wreck that brought out the caution to end the race. Earnhardt was unable to race Logano for the win once the caution was called.

"It was a pretty tough ending. (He) knew he was blowing up and told everybody he was going to stay in his lane," Kenseth said. "It just feels like we kind of lost control of the situation."

Denny Hamlin echoed the sentiments of his Joe Gibbs Racing teammate. He was caught in the accident and had to climb from his flaming car, and said after that Harvick caused the wreck rather than risk losing positions on the track that would knock him out of the Chase.

"The 4 could only run about 30 miles an hour, I think he saw people coming and he knew he was so probably going to be 30th, the last car on the lead lap, so he caused the wreck," said Hamlin.

He had a far more scathing take on Twitter after he was eliminated from the Chase. Joe Gibbs Racing, the heavy favourites in this championship race, instead had two of its four drivers knocked out of the playoffs on Sunday.

"What a joke we have a car with no motor wreck the field to end the race. Complete crap. Sorry to anyone who spent $ coming to this circus," Hamlin tweeted.

NASCAR reviewed video of the final restart several times with different team owners and crew chiefs following the race, and president Mike Helton said officials did not find anything amiss from Harvick.

"There is no evidence right now that there was anything that the 4 car did that was questionable," Helton said.

"Harvick is a really good driver," Bayne said. "I think he knows the limits of his car and where it's at, so that's why I think it was intentional."

Harvick said his issue was a broken exhaust pipe and "at the end, I was trying to get out of the way."

Logano, who won at Charlotte, Kansas and now Talladega in this round of the Chase, was showered in beer as he made his way to victory lane for the third consecutive week. It wasn't a celebration from the pro-Earnhardt crowd, but Logano didn't mind as he steered his Ford toward the cans being hurled in his direction.

"I was aiming for them ... it's kind of a cool explosion when you hit beer cans," he said. "Kind of a shame they're throwing their beers full. It was like it was raining out there. But that's OK. Everyone's passionate about their driver. That's what makes our sport great."