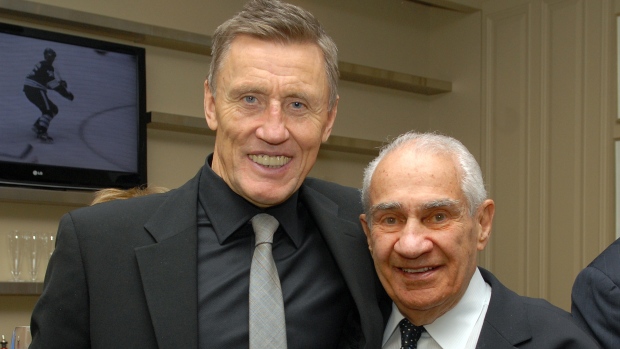 Jim Gregory never played hockey at a high level, but he became hockey royalty because of his unwavering passion and commitment to the game.

The Port Colborne, Ont., native lasted just two practices before he was cut from St. Michael’s College School’s Junior B team in 1952.

But at the insistence of future Hockey Hall of Famer and St. Mike’s teacher Father David Bauer, Gregory accepted a position as a stats keeper and trainer with the Junior A team - spawning a legendary, 60-year Hall-of-Fame career in the sport.

By the age of 33, Gregory rose to be named general manager of his beloved Toronto Maple Leafs, a post he held from 1969 to 1979, before directing NHL Central Scouting, and then ultimately becoming the founding father of Hockey Operations at the NHL over the last 33 years of his life.

The hockey world lost one of its most revered gentlemen on Wednesday.

Gregory, who was still active in his role as senior vice president at the NHL, passed away after a long illness. He was five days shy of his 84th birthday.

Gregory was inducted into the Hockey Hall of Fame as an honoured member in the builder category in 2007. He also served as the Hall’s selection committee chairman for 17 years.

“It is impossible to express the extent to which the National Hockey League family adored Jim Gregory and the loss we feel as a result of his passing,” NHL commissioner Gary Bettman said in a statement. “Jim Gregory wasn’t just a great ‘hockey man,’ though he certainly was that. He was a great man … and mentor and friend to too many to number.

“Jim was one of the first to welcome me to the NHL almost 27 years ago and I have treasured his friendship and relied upon his wisdom every day since. Nobody loved the game more. Nobody ever served it better. We will miss him terribly.”

Gregory’s path to the NHL was paved with humble roots. He spent nearly a decade with the St. Michael’s Majors, who he helped to the Memorial Cup in 1961 as a jack-of-all-trades manager.

He later quit his full-time job with Colgate-Palmolive to work for Leafs owners Conn and Stafford Smythe as a scout and manager of the Leafs’ reserve list, managing the Toronto Marlies.

Gregory was awarded a Stanley Cup ring by the Maple Leafs in 1967 for his work with the club, which included a six-week stint that season as interim manager while Punch Imlach was sick.

“That was a heck of a thing for a young guy who had been cut from junior hockey to wind up having a job with the Toronto Maple Leafs,” Gregory said later. “Let me tell you, in Canada that was like winning the lottery and going to heaven, in the same breath.”

Gregory said when he was assigned to become a Maple Leafs scout in 1968, it was a position he thought he’d hold forever – because it couldn’t get any better than working in the NHL.

Somehow, for Gregory, it did. When Imlach was fired as the Maple Leafs’ GM in 1969, Gregory was tapped by the Smythes to replace him.

Gregory was tasked with transitioning an aging Cup-winning roster into the next era. He was as innovative as he was industrious. Gregory was among the first to survey Europe for talent. He recruited Borje Salming and Inge Hammarstrom from Sweden to play for the Leafs in 1973, the first NHL signings from Europe.

"He was like a second father to me," Salming told NHL.com on Wednesday. "I love that man."

At a time when assistant coaches were just beginning to be in vogue, Gregory implemented an organizational scouting system and hired five full-time scouts, a first in the NHL.

There were some awkward moments along the way. While owner Harold Ballard was in prison from 1972 until 1974, Gregory had to drive to Kingston, Ont., to visit him at the minimum-security facility to negotiate player contracts.

Sittler and McDonald visited Gregory in the last two weeks as his health was failing.

"This is a sad day for hockey," Sittler told TSN. "We went through some turbulent times, but Jim Gregory was the stable guy through it all in that. He was our guiding light. I love the guy. I'm going to miss him."

Former Leafs captain Darryl Sittler joins Andi Petrillo and Dave Poulin on Leafs Lunch to share stories about the late Jim Gregory, who drafted him to the Leafs, and discuss his incredible life and career.

n 1979, after the Maple Leafs beat an Islanders team on the cusp of a dynasty, it took Ballard five days to give Gregory the courtesy to let him know he’d been fired. He found out on a phone call from NHL president John Ziegler, who was calling to ask if Gregory would replace Jack Button, the father of TSN’s Craig Button, as director of the league’s Central Scouting bureau.

“That’s how I found out,” Gregory said in 2009. “I got dressed and drove right down to the city. I went to my office and Punch Imlach [who had been hired to return as GM] was already there. He said, ‘What are you doing here?’ Two days later, I met John Ziegler and he offered me a job with the league. I told him, 'I haven't even been told I've been fired!'”

But mostly, Gregory cherished his time with the Maple Leafs, the team he fell in love with as a boy playing road hockey and listening to Foster Hewitt on the radio.

“I couldn’t believe my luck, working for the Maple Leafs in important jobs, so one day it got the better of me and I asked Stafford [Smythe] why he had hired me,” Gregory recalled in a 2007 interview. “He said; ‘I just had a feeling you were going to be a good hockey man. I watched you and made up my mind.’”

With the NHL in a hockey operations role since 1986, Gregory proved to be more than just a ‘good hockey man.’ At GM meetings, he was a voice of reason, explaining the ins and outs of rules and their history and intent to managers who had the power to change them.

Gregory was among the first in major professional sports to shepherd in the review of scoring plays with the help of video. He also quietly began the NHL/NHLPA Player Emergency Assistance Fund, which provides former players in need and their families with money forfeited by player fines and suspensions.

Stanley Cup winner and former Maple Leafs GM Cliff Fletcher called Gregory “one of the most underappreciated guys in the league.”

“It’s people like Jim Gregory that make the NHL,” Fletcher said in 2007. “He is as solid as the Rock of Gibraltar.”

Gregory was as solid as his handshake, which always came with a smile and a kind word.

"Jim was one of the great gentlemen of hockey," Maple Leafs president Brendan Shanahan said in a statement. “He was a friend to so many within the game - the Leafs, the League, the Hall of Fame and beyond. His friendships and contributions to hockey were so deeply rooted. He was a living, breathing piece of hockey history. He will be greatly missed."

“Jim was a friend to all who knew him,” said Craig Button, whose mother, Bridget, worked for Gregory in the Leafs’ front office. “His legacy in hockey is the quintessential ‘Swiss Army Knife’ who did it all. He loved hockey and appreciated being part of it every day and valued the people involved. To know Jim was an honour and he truly is hockey royalty.”

Gregory is survived by his wife of 60 years, Rosalie, his four children and 13 grandchildren, including son David, who followed in his footsteps as a scout with NHL Central Scouting. Services are pending.​