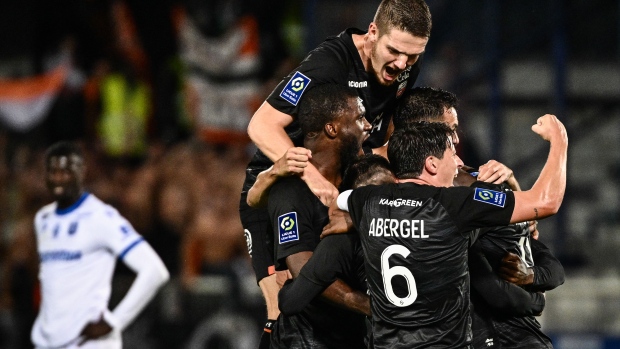 PARIS (AP) — Wissam Ben Yedder is still hoping to make France's World Cup squad at age 32 despite heavy competition for the forward spots. His hat trick on Sunday should help the Monaco striker's quest for Qatar.

Ben Yedder scored a treble as fifth-place Monaco thrashed Nantes 4-1 to extend its winning streak to four games in the French league.

Switzerland forward Breel Embolo opened the scoring by heading home a rebound in the second minute.

Ben Yedder doubled the lead with a chip four minutes later. He capitalized on a counterattack to make it 3-0 with a first-time effort in the 28th. He completed his hat trick from the penalty spot in the 62nd after Andrei Girotto had fouled Kevin Volland.

Ben Yedder, who has 19 appearances for the national team, was not called up by France coach Didier Deschamps for the September games against Austria and Denmark.

“Every player dreams of this World Cup,” Ben Yedder told Canal Plus television. “In my club, I try to work hard to always perform well. And as I said, I won’t give up.”

Ben Yedder was the second most prolific scorer in the league behind Kylian Mbappe last season. However, he struggled this summer and couldn’t find the net in the first seven league games.

Nantes had a consolation goal in the 79th when Monaco left back Caio Henrique cleared a cross into his own net.

Substitute Theo Le Bris dribbled past Akim Zedadka to slip the ball through the legs of goalkeeper Lucas Chevalier in the 87th to secure the victory.

The hosts were reduced to 10 men in the 62nd when Burkina Faso winger Dango Ouattara picked up a second yellow card for stamping on Adam Ounas’ ankle.

Lorient took the lead in the ninth minute with an own-goal from Lille right back Bafode Diakite, who turned a rebound into his own net.

But Lille equalized in the 78th with a tap-in from Canada striker Jonathan David, who notched his sixth league goal of the season.

Lorient rode its luck at times as Lille winger Ounas struck the post with a direct corner kick in the 38th before a flick from David bounced off the bar in the 68th.

“Today, we just look to improve,” he told Amazon Prime Video. “The points that we rack up, of course they are very important for safety. Lorient’s spot in the French league is what matters.”

Surprise package Lorient has turned Stade du Moustoir into a fortress by winning every home game this season while Lille, which lifted the league title in 2021, still hasn’t kept a clean sheet this season.

American forward Tim Weah, returning from a foot injury and trying to get ready for the World Cup, was included in Lille’s matchday squad for the first time this season but did not come off the bench.

Elsewhere, fourth-place Lens edged Lyon 1-0 with a spot kick from Florian Sotoca in the 82nd after Facundo Medina’s header had hit the arm of Lyon center back Thiago Mendes. Lens remained one of three teams still unbeaten in the league, along with Paris Saint-Germain and Marseille, while Lyon had a fourth straight loss to slip to seventh place.

“We didn’t show much tonight. We’re in a very complicated situation,” Lyon goalkeeper Anthony Lopes said. “We will have to find the solutions among ourselves and maybe, at times, have to tell each other hard truths. It’s not good enough. A club like Lyon aims to chase the Champions League spots. We are very far from it, the gap is widening.”

Promoted Toulouse beat Montpellier 4-2 with goals from Stijn Spierings, Zakaria Aboukhlal, Fares Chaibi and Brecht Dejaegere. The match was suspended for about 15 minutes in the second half as players headed back to the locker room because of tear gas coming from the stands.

Ecuador defender Jackson Porozo leveled in stoppage time for Troyes in a 2-2 draw with Reims, which finished with 10 men after Japan international Junya Ito was red-carded for a high tackle in the 56th. Reims blew the lead twice despite goals from England under-21 striker Folarin Balogun in the 13th and Ito in the 54th.

Kosovo winger Elbasan Rashani and Benin international Jodel Dossou scored in the closing minutes to give Clermont a 3-1 win over bottom side Ajaccio.

Senegalese striker M’Baye Niang salvaged a point from the penalty spot in the 86th for 10-man Auxerre in a 1-1 draw with Brest.

Defending champion Paris Saint-Germain edged Nice 2-1 on Saturday to restore its two-point lead over Marseille atop the standings.