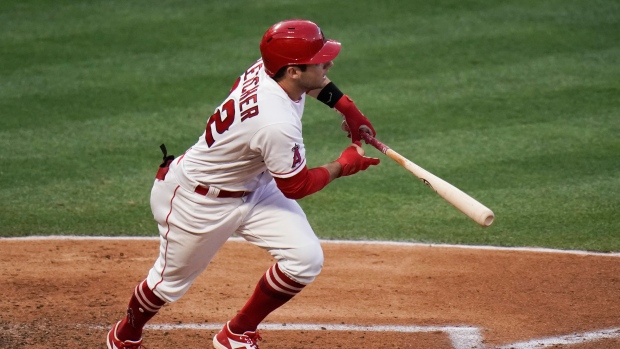 Justin Upton and Taylor Ward homered in the Angels' four-run second inning, and Mike Trout had a late RBI triple as the Halos opened the Freeway Series with a positive jolt from only their fifth win in 16 games.

“We got the mojo back on our side a little bit,” said Griffin Canning, who pitched six-hit ball into the sixth inning for the Angels. “Hopefully we can keep bringing that same energy. It was a really good atmosphere. It was a lot of fun. ... Momentum is such a big thing in baseball, so any time you can keep the momentum on your side, it’s going to be beneficial.”

Mookie Betts homered in the ninth for the Dodgers, who have lost four straight. The defending World Series champions swept the six-game Freeway Series last season, but they've lost 14 of 18 overall this year in an increasingly alarming early-season swoon.

“We’re too good of hitters to do this for a whole year,” Dodgers catcher Will Smith said. “Eventually we’ll get the offence going.”

Canning (3-2) ended the Angels' recent pitching woes despite throwing to new catcher Drew Butera about 90 minutes after they first met. Patrick Sandoval then pitched 3 1/3 innings of relief for his first career save, completing the Angels' best-pitched game of a rough week.

“Between (Sandoval) and Griff, that was outstanding tonight,” Angels manager Joe Maddon said. “It’s almost like a complete game where your bullpen doesn’t move around that much. All these other guys benefit from that.”

Julio Urías (4-1) had his least impressive start in a strong season for the Dodgers, yielding eight hits and five runs over five innings in his Angel Stadium debut.

Urías' surprising struggles weren't the only problems for the defending champs, who also got a rocky season debut from reliever Joe Kelly and a Grade 1 hamstring strain for outfielder AJ Pollock.

“We just need to be better,” Dodgers manager Dave Roberts said. “I still know our players are very good and talented, but it’s about going up there and making productive outs, getting hits when you need to get them, and we just need to get better.”

The Dodgers scored first on Matt Beaty's RBI groundout in the second, but Upton led off the Angels' half with a 436-foot homer in his first game since returning from a two-day break with a bruised knee.

After Ward added his first homer of the season, catcher Butera doubled in the first at-bat of his season debut before scoring on Fletcher's two-run single.

The Dodgers are already struggling mightily with pitching injuries, and their overall injury situation got even more shaky when Kelly, an Anaheim native, made his season debut in the sixth.

The veteran reliever was tagged for RBI hits by Jose Rojas — a fellow Anaheim native — along with Fletcher, Ohtani and Trout, who got credit for a triple when Pollock misplayed his sinking liner to left. Pollock walked off the field gingerly after the play.

Kelly, who had surgery to remove cysts in his shoulder late last year, gave up five hits and four runs while getting just two outs.

The Angels acquired Butera from Texas earlier in the day in exchange for cash considerations. The 37-year-old journeyman catcher played 10 games for the Halos in 2015 before being traded to Kansas City and winning a World Series ring. Butera is filling in alongside Kurt Suzuki while Max Stassi and Anthony Bemboom are out with injuries.

Dodgers: OF Cody Bellinger ran at 60% effort and felt good afterward in Arizona, manager Dave Roberts said. The former NL MVP hasn't played since April 5 with a hairline fracture in his left leg. ... Rookie Zach McKinstry is moving without pain from his oblique injury.

Angels: Bemboom can't play because his back recently “locked up,” manager Joe Maddon said. Stassi is on the injured list with an apparent concussion.

Clayton Kershaw (4-3, 2.95 ERA) will start on three days' rest for the first time since the 2016 playoffs against the Angels' Dylan Bundy (0-3, 4.00 ERA). Kershaw is helping out the injury-depleted Dodgers because he's coming off the shortest start of his career Tuesday against the Cubs, throwing 39 pitches and going just one inning.