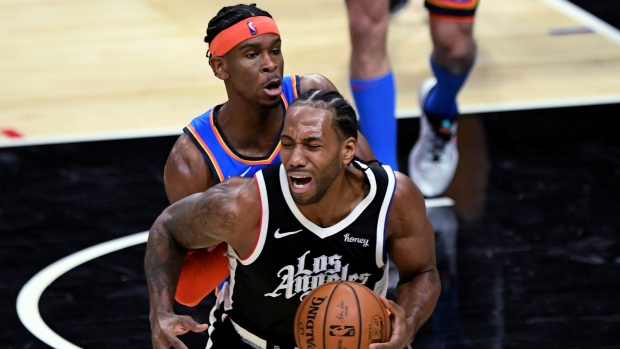 Serge Ibaka had 17 points and 11 rebounds to help the Clippers improve to 12-4, tying the Lakers for the NBA’s best record.

The Thunder were in catch-up mode most of the way before dropping their second straight and fourth in five games. They were just 14 of 42 from 3-point range and only got to the free-throw line 13 times.

The Clippers grabbed control in the first half, scoring 36 points in the first quarter and 34 in the second on 63% shooting. They had scoring runs of 21-2 and 11-4 in the first.

They opened the second quarter with a 19-10 spurt, including George’s steal and dunk followed by his consecutive 3-pointers, for their largest lead of 27 points.

The Thunder worked to reduce a 23-point deficit to 10 points in the third. They outscored the Clippers 15-2 during one stretch, helped by eight points from Dort and Mike Muscala’s first 3-pointer after he missed four attempts in the first half.

But Leonard quickly put the Clippers ahead 91-75, running off six in a row. Muscala hit another 3-pointer that left the Thunder trailing by 13 going into the fourth.

George scored 11 points in the fourth against his old team, when Gilgeous-Alexander had 10 for the Thunder.

Thunder: It took until the second half, but Dort and Muscala continued their streaks of both hitting at least one 3-pointer in each game they’ve played this season. Dort leads the team with 34 3-pointers and Muscala is second with 26. ... They dropped to 1-6 against the West.

Clippers: Lou Williams recorded his 249th career game with at least five assists off the bench, tying J.J. Barea for the most such games in NBA history.