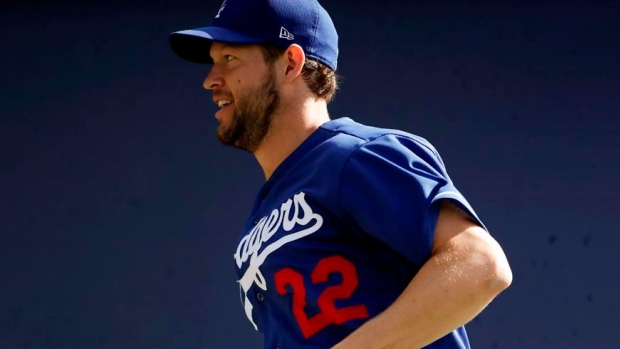 PHOENIX — Clayton Kershaw struck out four batters without allowing a hit in his spring training debut Friday, the first step toward a possible opening day start for the Los Angeles Dodgers.

Kershaw, the Dodgers’ longtime ace, faced a Milwaukee Brewers lineup with five expected regulars, including Brock Holt and Keston Hiura at the top of the order. He struck out both on three pitches each to open the bottom of the first.

After two walks and a strikeout of the final batter he faced, Kershaw was done after 1 2/3 innings and left with a 1-0 lead. The Brewers came back for a win.

“It was awesome. Maybe I didn’t hit one spot, but physically I felt like the ball was coming out, felt like it was breaking the right say,” Kershaw said. “Now just got to figure out how to throw strikes, but other than that, it was a good first step for sure.”

Kershaw said his fastballs, which hit up to 93 mph, had life on them as they reached home plate. He left to a standing ovation from the Dodgers fans at American Family Fields of Phoenix, the Brewers’ spring home.

“First outing, up and down, to see the execution of the fastball, the swing that you saw, the life to the ball, really good,” Dodgers manager Dave Roberts said. “Didn't compromise the stuff the second inning. Just didn't land the breaking ball, but ... the sharpness of it was there, and that comes with time. I couldn't be more satisfied with this outing.”

He missed the start of the season due to shoulder soreness that caused him to be shut down for most of spring training. His streak of eight straight opening day starts came to an end.

This spring he’s completely healthy. He finished his day throwing more pitches in the bullpen, and hopes to pitch three innings in his next outing.

“It’s night and day,” Kershaw said. “Everything feels good. I didn’t feel bad last year, it was just spring, I had to get over that. But to have a full off-season and now have full spring feeling healthy, it can only help. So I’m encouraged by that.”

When Kershaw last pitched in a game situation, he blew a 3-1 lead in the eighth inning of Game 5 of the NL Division Series, surrendering back-to-back home runs to Anthony Rendon and Juan Soto of the eventual World Series champion Washington Nationals.

Kershaw took his latest post-season shortfall hard, and was asked if it overshadows a good regular season in 2019.

“You always remember how it ended, obviously. So just take it, it’s no fun, try to move on as best you can and try to get ready for this year,” Kershaw said. “I don’t really look back or whatever. You kind of just remember what happened at the end. So hopefully you win the last game one of these years.”

Roberts hasn’t named an opening day starter for the Dodgers.

“It’s always a special day, if it happens, for sure,” Kershaw said.

NOTES: New Dodger Mookie Betts, starting in right field, threw out Omar Narvaez at home plate to end the second inning, assuring Kershaw of a scoreless outing. ... Roberts said RHP Yadier Alvarez, scheduled to pitch in relief Friday, did not do so because he didn't feel right when getting loose in the bullpen.