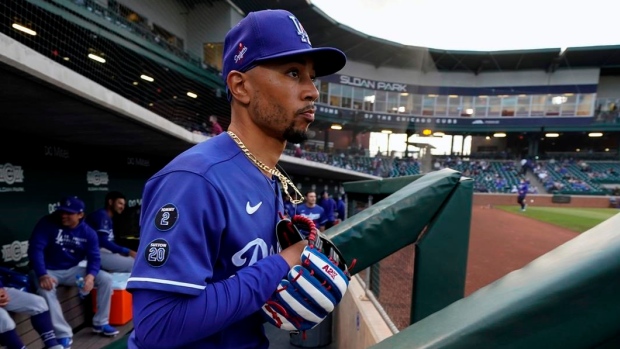 The World Series champion Los Angeles Dodgers will be without the services of outfielder Mookie Betts on Tuesday afternoon for a matinee with the Seattle Mariners.

Mookie Betts is not in the lineup today after taking a fastball flush off the right wrist/forearm area last night. No we wait to find out how bad the injury is.

Betts, 28, was hit by a pitch on his right wrist area in the ninth inning of Monday night's 4-3 loss to the M's by a fastball from Seattle closer Rafael Montero. After being checked on by the training staff, Betts stayed in the game and was retired on a game-ending double play.

Following the game, Dodgers manager Dave Roberts said that he would allow Betts to play on Tuesday if he felt that he could.

“I just want to make sure that it doesn’t affect his throwing or his swing, so I think that he’s pretty honest with me," Roberts said. "So if he feels like he can play, then he’ll be in there.”

Through 12 games this season, his second with the Dodgers, Betts is hitting .292 with two home runs, two runs batted in and an OPS of .914.