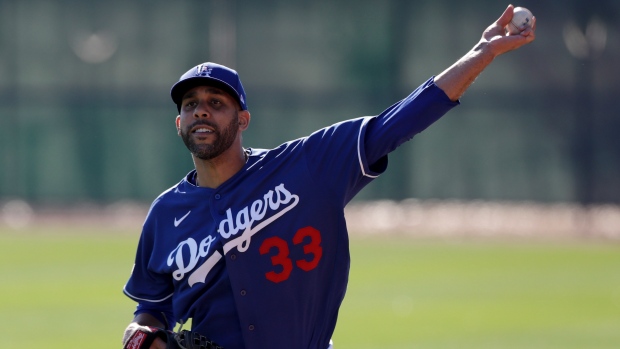 Dodgers pitcher David Price will not play this season because of concerns over the coronavirus pandemic, delaying his Los Angeles debut until next year.

The five-time All-Star became the latest player to opt out, posting Saturday on Twitter that he wouldn’t participate in the 60-game season that’s scheduled to begin July 23.

“After considerable thought and discussion with my family and the Dodgers, I have decided it is in the best interest of my health and my family’s health for me to not play this season,” he said.

Felix Hernandez is opting out of 2020 season

The 34-year-old veteran righty, who has spent his entire 15-year career in Seattle, recorded an 1-8 record with a 6.40 ERA over 15 starts and 71.2 innings pitched last season. It marked the fewest innings he's pitched in his long career.

Hernandez signed a free agent contract with the Braves this winter.

Price’s announcement came a day after Los Angeles Angels star Mike Trout said he wasn’t “comfortable” with the current climate and might not play. On Saturday, San Francisco catcher Buster Posey said “there’s still some reservation on my end” about playing.

First baseman Ryan Zimmerman of the World Series champion Washington Nationals, Colorado outfielder Ian Desmond and Arizona pitcher Mike Leake are among those who have already said they’re out this year.

The Dodgers got Price and former AL MVP Mookie Betts from Boston in a February trade for outfielder Alex Verdugo and prospects.

The 34-year-old Price made two starts in spring training for the Dodgers, striking out 10 in 4 1/3 innings before all camps were closed March 12 because of the virus outbreak.

“The Dodgers fully support David’s decision to sit out the 2020 season,” the team said in a statement. “We have been in constant contact with David and we understand how much this deliberation weighed on him and his family.”

“We know he’ll be rooting hard for the club every day and look forward to having him back with us in 2021,” it said.

Price has a $217 million, seven-year contract that runs through 2021. He was going to make $32 million this season, with the Red Sox paying $16 million of that, before the virus shut down the sport.

Price had already made his own contribution to the Dodgers organization.

In late May, Price said he would give $1,000 each to 220 minor leaguers to help their offset costs. There will be no minor league baseball this year because of the pandemic.

In his Twitter note addressed to Dodgers Nation, Price said, “I’m sorry I won’t be playing for you this year, but look forward to representing you next year.”