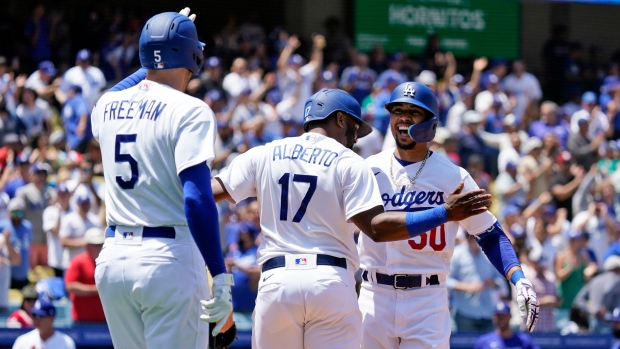 LOS ANGELES (AP) — Edwin Rios hit a three-run homer during a six-run second inning and the Los Angeles Dodgers erased another early deficit in a 12-3 victory over the Arizona Diamondbacks to sweep the first doubleheader between the NL West rivals Tuesday night.

In the opener of the day-night twinbill, Mookie Betts, Trea Turner and Justin Turner homered in a five-run sixth as Los Angeles outlasted Arizona 7-6.

Trea Turner added two hits and four RBIs in the second game, and Freddie Freeman had three hits and three RBIs to help the Dodgers extend their winning streak to four games. They can finish a four-game sweep Wednesday.

“I just think we’re getting going a little bit more,” Trea Turner said between games. “I feel like nobody has really played up to their potential other than maybe Mookie right now, and maybe Freddie. We know there’s a lot more in there, so hopefully going forward there’s a lot more home runs up and down the lineup. We’re all dangerous players, so I expect more of that.”

Jordan Luplow and Christian Walker staked Arizona to a fast start with first-inning home runs, but the Diamondbacks lost at Dodger Stadium for the 21st time in 24 games. Walker has homered in each of the first three games of the series.

Dodgers starter Tyler Anderson (4-0) managed to find his way quickly after Arizona flashed early power. He gave up two runs and seven hits over seven innings with no walks and seven strikeouts.

Diamondbacks starter Merrill Kelly continued to struggle at Dodger Stadium, giving up eight runs and five hits with four walks over two innings. He is 0-6 in nine starts against the Dodgers.

Los Angeles fell behind by multiple runs for the eighth consecutive game, but rallied to win again. Trea Turner tied it 2-all in the first on a two-run single and added an RBI single in the second ahead of Rios’ three-run shot, his fourth.

Rios, who has forced his way into playing time of late with three home runs over his last six games, was starting as the cleanup hitter for the first time in his four-year career.

Dodgers infielder Hanser Alberto pitched the ninth inning, giving up one run in his third career appearance on the mound.

It was the first doubleheader at Dodger Stadium since 1999, when the Dodgers and Colorado Rockies made up a rainout from earlier in the season. It was also the first scheduled doubleheader in Los Angeles since 1987.

Betts tied the opening game in the sixth when he connected for his third homer in four days. The star right fielder is heating up with the weather, getting eight homers and 17 RBIs in the last four weeks after a slow start to the season.

Betts doubled and scored on Freeman’s single in the seventh inning of Game 1. He went 0 for 3 in Game 2, but walked twice and scored three runs.

With a no-doubt shot to left-center in the third inning of Game 1 and another to right-center in Game 2, Walker continued his career-long excellence against the Dodgers.

Dodgers: LHP Clayton Kershaw still has back pain from an inflamed pelvic joint. The three-time Cy Young Award winner is “unlikely” to throw a bullpen Wednesday as previously scheduled, manager Dave Roberts said. ... RHP Tommy Kahnle went on the injured list with right forearm inflammation and is scheduled for an MRI on Wednesday.

Diamondbacks: 2B Ketel Marte appeared to tweak his left hand on a swing during his final at-bat in Game 1 and was a late scratch for Game 2. He was listed as day-to-day.