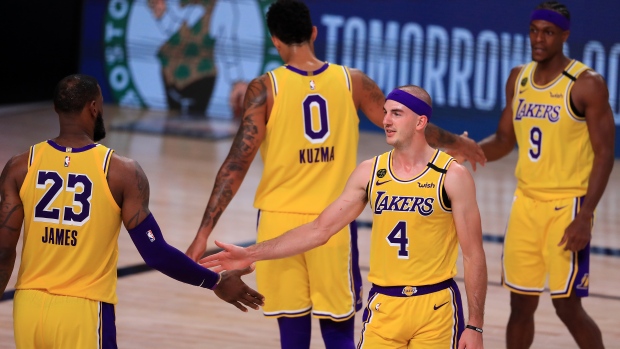 LAKE BUENA VISTA, Fla. — Anthony Davis was the biggest player on the floor, and the Houston Rockets had no answers.

Davis had 29 points and 12 rebounds, LeBron James finished one assist shy of a triple-double and the Los Angeles Lakers topped the Rockets 110-100 on Thursday night to take a 3-1 lead in their Western Conference semifinal series.

“Turnovers,” Davis said. “We had too many turnovers.”

That was one of the few complaints the Lakers could make after Game 4.

Russell Westbrook had 25 points and James Harden had 21 — on 2-for-11 shooting — for the Rockets, who got 19 from Eric Gordon and 14 from Austin Rivers.

The scoring margins were massive: Houston got outscored 62-24 in points in the paint, 17-3 on second-chance points, 19-2 on fast-break points.

“We know we’re in a big hole now, but the next game is the game we’ve got to win,” Rockets coach Mike D’Antoni said. “We’ll go out and if we lay it on the line like the way we did in the fourth quarter, we’ll be fine.”

The Lakers were up by 23 midway through the fourth, well on their way to a blowout win. That’s when Houston’s offence woke up.

Westbrook made a corner 3 with 3:01 left, Harden got a steal and a pair of free throws on the next possession, and the Rockets put together a 18-2 run to get within 103-96. The Lakers turned the ball over on four consecutive possessions during that stretch, giving Houston life.

“I think we did a good job getting more aggressive, and that led to a lot more opportunities offensively," Harden said.

Harden was then asked why the Rockets were flat through three quarters.

“Good question," Harden said, later adding, “there's nothing we can do about it now."

The Lakers, on their biggest possession of the night, went to Davis — who was guarded by Gordon, who stands about half-a-foot shorter than Davis. It led to an easy score for Davis with 1:47 left, and the Lakers had a bit of breathing room.

“Obviously, we've got to be better," James said. “We've got to close out games the right way."

This is how easy things were for the Lakers: In the third quarter, James grabbed a defensive rebound, turned and fired a 70-foot pass — soccer throw-in style — to Davis, the ball sailing over the five Rockets who were jogging back on defence. Davis caught the pass in stride and laid it in for a score, the ball never touching the ground.

And this is how difficult things were for the Rockets: They went 4 for 20 from the field over a 16-minute stretch spanning from late in the first quarter to early in the third, getting outscored 41-23 and seeing their deficit growing from three to 21.

The Lakers won Game 3 by holding Houston to 38 points in the second half — and clamped down again in the first half of Game 4. It was 57-41 Lakers at the break, meaning Houston had scored 79 points in its last 48 minutes of basketball.

For context: The Rockets had 79 points in a two-quarter span on five different occasions this season. The stretch in the fourth made it interesting, but the Lakers never lost the lead.

“Overall, it's a heck of a win for our group," Lakers coach Frank Vogel said. “Again, we're not going to be comfortable playing against this team with the firepower they have."

Lakers: When James gets to three wins in a series, it’s usually over. His teams — including the Miami and Cleveland stints — are 13-0 in series with a 3-1 lead, and they’re 36-10 overall in the game immediately following the one where they win the third game. ... Dion Waiters (sore left groin) was inactive, but the Lakers are hoping it could be a short-term problem. JaVale McGee sat with a left ankle sprain.

Rockets: Houston is one of the franchises that has overcome a 3-1 deficit, doing so against the Clippers in the second round of the 2015 playoffs. . ... Harden went to the line for the first time with 1.3 seconds left in the first quarter; he’s now taken a first-period free throw in 17 of his 18 games in the bubble.

Houston was again without Danuel House, while the NBA probes whether he violated conduct rules inside the bubble. “They’re investigating it and once it’s through they’ll tell us what the deal is and we’ll go with it,” D’Antoni said.

Houston's minus-26 rebounding differential matched the worst in the playoffs this season. Indiana was outrebounded by Miami by 26 in Game 4, as the Heat finished a sweep of that series.