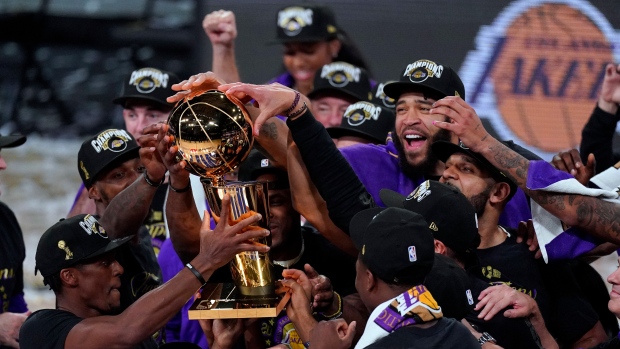 The Los Angeles Lakers' 2020 title doesn't deserve an asterisk - it merits more than that, or so says the team's general manager, Rob Pelinka.

Appearing on ESPN's Adrian Wojnarowski's Woj Pod, Pelinka disputed the idea that their championship - won in six games over the Miami Heat - was less than legitimate because the playoffs played out entirely inside the Walt Disney World bubble in Orlando against a shorthanded team.

“I think some have asked, ‘Will this championship have an asterisk on it?’" Pelinka told Wojnarowski. "I like to say, ‘No, it has a gold star’ … Just because you had to do so much more to get to the end, and I think it was a testament to our team and the players and staff coming together in that environment."

The comment came in response to Heat president Pat Riley's remarks last week that suggested things might have been different had the Heat not been riddled with injuries, including those to Bam Adebayo and Goran Dragic.

“They beat us fair and squarely,” Riley said in a Zoom availability. “They were the best team. But there’s always going to be that asterisk, that caveat. If we had Bam and Goran - Goran was our leading scorer in the playoffs - at 100 per cent, it could have gone to a seventh game, but I’m not going to look back on it, I’m just going to look at all the positive things.”

Pelinka now heads into the offseason with a new contract for big man Anthony Davis as its top priority.