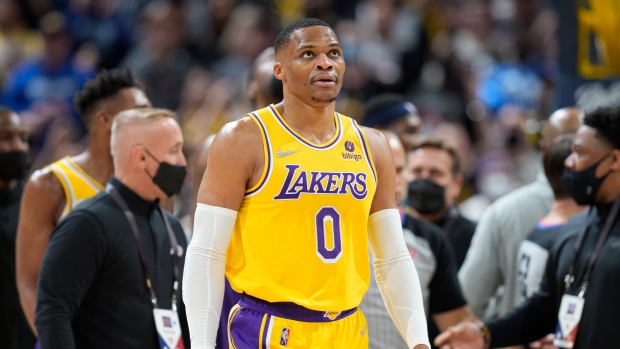 Moving Russell Westbrook will be easier said than done for the Los Angeles Lakers.

The Athletic's Jova Buhan reports that teams in conversation with the Lakers are demanding at least one first-round selection for taking on the 33-year-old's massive salary. At present time, it's a throw-in the Lakers aren't prepared to concede.

While he can opt out should he so choose, Westbrook is widely expected to exercise his $47.1 million player option ahead of the June 29 deadline.

Buhan's colleague, Sam Amick, reported last week that the Lakers were now strongly considering the possibility of moving forward with the Long Beach, CA native. Should the Lakers fail to trade him, they could also buy out or waive and stretch the nine-time All-Star, both of which are highly unlikely scenarios.

At a season-ending media availability, Westbrook admitted that he had significant trouble in adjusting to his new team.

"Ah, very rarely," Westbrook said of when he felt like himself. "There were time and spurts. I was just trying to find my way honestly and do whatever it was that was asked of me."