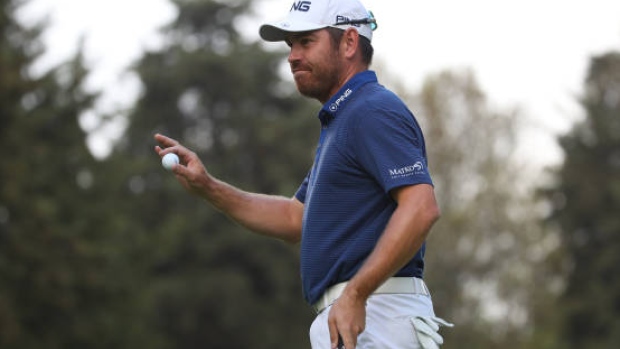 SUN CITY, South Africa — Louis Oosthuizen had to make a trip to the hospital this week because of kidney stones. He withdrew from the pro-am at the Nedbank Golf Challenge and was awake since 3 a.m. on the day of the first round because of the discomfort. He was considering pulling out of the main tournament.

Instead, the South African chose to play and produced a bogey-free 9-under-par 63 on Thursday — only one off the course record — to take a three-shot lead after the opening round at Sun City.

Oosthuizen made four birdies on the opening nine and five on the closing stretch to open a big gap on Thomas Detry (66) in second on 6 under.

Oosthuizen has won five of his nine European Tour titles at home but is yet to triumph at the Nedbank Challenge.

He didn’t show any discomfort from his ailment on the course, apart from walking a little slower than usual round Gary Player Country Club.

“Considering that at 3 a.m. this morning I didn't think I was going to tee it up, I'm very chuffed with that round,” he said.

“This morning was just a little niggly but I went up to the range, hit a few shots and it didn't really bother me. It was more the walking fast that got it, so I just slowed everything down and (it) worked nicely.”

Behind Detry, Guido Migliozzi is third on 5 under, and defending champion Lee Westwood, Ernie Els and Zander Lombard are tied for fourth another shot back.

Westwood is aiming to become the first man to win the Nedbank Challenge four times and made a solid start in pursuit of that goal. The Englishman was also bogey-free in his 68.

Els, his fellow South African David Frost and Zimbabwean Nick Price are the others to have won three titles at Sun City.

Els, who turned 50 last month, rolled back the years with his 68 to put himself in contention for a first professional victory in six years.He won his last Nedbank Challenge title 17 years ago.

Race to Dubai leader Bernd Wiesberger is also in Sun City and opened the penultimate tournament of the European season with a 1-under 71 to sit in a tie for 25th.