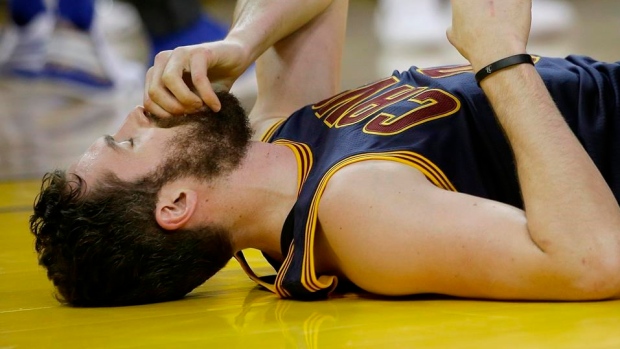 CLEVELAND — Already underdogs, the Cavaliers may also be undermanned for Game 3 of the NBA Finals.

The Cavs practiced Tuesday without starting forward Kevin Love, who is following the league's concussion protocol after being struck in the back of the head by Golden State's Harrison Barnes during Sunday night's Game 2 blowout loss.

Love stayed in the locker room while his teammates practiced on the floor at Quicken Loans Arena, where they are 7-0 in this post-season and will have 20,000 screaming fans on their side for the next two games. Cavs coach Tyronn Lue said Love is feeling better, but his status for Game 3 — and the remainder of the series — hinges on him passing several physical tests and getting cleared to play.

Love might be uncertain. LeBron James, on the other hand, is positive the Cavs can't let anything become a distraction.

"Next man up," James said. "We're down 0-2, and we can't afford to look and say: 'Wow, Kev's not playing. What are we going to do?' It's next man up because it's a must-win for us. So obviously his health is very important, but in the situation we're in now, we've got to stay confident."

If Love can't play, Lue will have to replace 16.5 points and 9.4 rebounds per game. A potential move is bringing back Russian centre Timofey Mozgov, who was disappointing in the regular season and has been exiled to the bench. The 7-foot-1 Mozgov was Cleveland's second-leading scorer in last year's finals against the Warriors, who switched to a smaller lineup to drive him off the floor.

One thing that Lue and his staff will change is the approach when it comes to physicality: Cleveland had success when it got aggressive with the Warriors in last year's finals, so it's a reasonable assumption that the Cavs will try it again Wednesday.

Lue considered other lineup changes in hopes of slowing the Warriors, who won the first two games by a combined 48 points despite sub-standard performances by shooting stars Stephen Curry and Klay Thompson, whose splashes have been mere sprinkles so far.

"We've thought about it, we've talked about it, but I can't let you know what we're planning on doing," Lue said with a laugh.

Lue's first post-season as a head coach has been relatively uneventful. He's made savvy moves, kept his players focused despite a few lengthy breaks between series and handled the daily circus surrounding any team James plays on with a steadying hand.

But despite his team's 33-point loss in Game 2, Lue has faith the Cavs will respond.

"We've just got to execute," he said. "When we get chances on the break to convert, we've got to convert. When we get open shots, we've got to take advantage of open shots. We just can't turn the basketball over like we've been doing. If they turn the ball over 20 times, which is good, in our home building, we should be fine to get out and run and play with pace.

"We're not discouraged. They won two games and the series is not over until you win four."

For now, the Cavs' only objective is to win one.

Until the finals, they rampaged through this post-season, sweeping series against Detroit and Atlanta before eliminating Toronto in six games. Unlike last year, when Love was out with a dislocated left shoulder and Irving was knocked from the finals with a shattered kneecap, James was getting help and didn't have to carry the Cavs virtually all by himself.

And while James' statistics through two games are LeBron-like — 21 points, 10 rebounds, 9 assists — he had seven turnovers in Game 2, a performance that irked him so much that he got on the first team bus leaving Oracle Arena and immediately began watching it on the team's ride to its San Francisco hotel.

He dismissed the sentiment offered this week from legendary coach Phil Jackson, who feels the four-time MVP should take over in Michael Jordan fashion.

In his sixth straight finals, James isn't changing a thing.

"I think for me to go out and be who I am and play as true to the game and as hard as I can and try to lead this team, that's who I am," James said. "Not anybody else. I'm not Michael. I'm not (Muhammad) Ali. I'm not nobody else that's done so many great things for sport. I am who I am, and if I'm able to go out and put together a game like that, it wasn't because I was possessed."