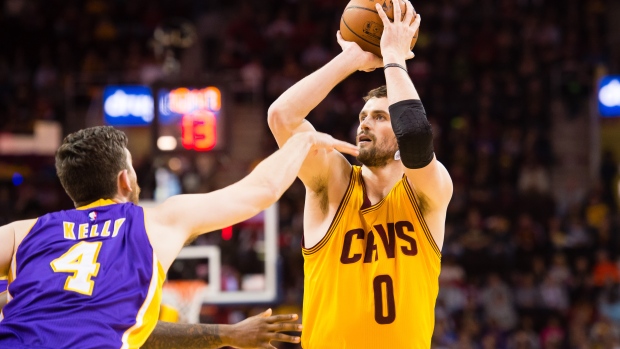 Cleveland Cavaliers owner Dan Gilbert promised LeBron James he would do whatever it took financially to surround him with a team capable of ending the city's 51-year championship drought.

On the first day of free agency, Gilbert spent nearly a quarter of a billion dollars to back that up. All without addressing James' contract yet.

The Cavaliers agreed to terms with Kevin Love on a maximum contract of five years and more than $110 million and gave swingman Iman Shumpert a four-year, $40 million deal, two people with knowledge of the negotiations told The Associated Press on Wednesday. The people requested anonymity because the deals had not been announced.

It was also reported by several outlets, first by ESPN, that forward Tristan Thompson will sign a five-year, $80 million deal, bringing Gilbert's financial outlay to a whopping $230 million before the NBA's fiscal year was even 24 hours old.

The contracts cannot be signed until July 9, when the salary cap is established and it becomes clearer just how steep a tax bill Gilbert will be facing. But that was all part of the plan when James decided to return home last summer. He made it clear what his expectations were, and Gilbert didn't hesitate to oblige.

After James carried the injury-plagued Cavaliers through the playoffs to a six-game loss to Golden State in the finals, he chose not to exercise the option on his contract for next season and become a free agent. He never intended to leave, but the message was clear: make it happen.

Gilbert and GM David Griffin certainly did on Day 1.

The day started with Love announcing in The Players Tribune that he was coming back to the Cavaliers after a few weeks of speculation that he could head somewhere else after one year with the Cavs. Love's season ended with a dislocated left shoulder in the first round of the playoffs and he had some testy moments with James in their first season together, but he made it clear on Wednesday that Cleveland is where he wanted to be.

"We're all on the same page and we're all in," Love wrote. "We have unfinished business and now it's time to get back to work."

The Lakers, Celtics and Suns were among the teams believed to be interested in Love, who was viewed by many across the league as gettable after he struggled at times to find his place with James and Kyrie Irving. But he was spotted at a pool meeting with James and other teammates earlier this week, a meeting he alluded to in the piece he published on Wednesday.

"Yeah, of course I've heard the free agency rumours," Love wrote. "But at the end of the day, and after meeting with my teammates (it turns out pools are great meeting places) and with the front office, it was clear Cleveland was the place for me."

After being the face of the Timberwolves franchise for six seasons, Love had a difficult time adapting to his new role as the third wheel in Cleveland. His averages of 17.5 points, 10.4 rebounds and 13.5 shots per game were all the lowest since he came off the bench as a rookie in Minnesota, and every tweet and quote between him and James was heavily scrutinized and dissected to try to decipher how the two All-Stars were getting along.

Love said all along that he just wanted to win, and the Cavs turned a worrisome 19-20 start into a blazing 34-9 finish to surge to the No. 2 seed in the Eastern Conference. Just as Love was figuring out how best to play with James and Irving and his team entered the post-season for the first time in his seven-year career, it all came to an end.

Irving was injured in Game 1 of the NBA Finals, and James carried the Cavaliers the rest of the way. Watching from behind the bench made Love even more determined to return healthy and give James the help he needs.

"After Game 1 of the NBA Finals, that's when it really struck me," Love wrote. "Sitting on the sidelines, I never wanted to play in a game more than that one. I had dreamed of playing in the NBA Finals and I just wanted to help my guys win. I couldn't have been prouder of them as they poured their blood, sweat and tears onto the court."

While Love was the scorer from outside and the flashy outlet passer, Thompson provided the toughness and hustle in the paint. He averaged 9.6 points and 10.8 rebounds in the playoffs and James said in the post-season that the rugged Thompson, who is represented by the same agency as James, should be a Cavalier for life.

Shumpert was a key addition midseason, coming over with J.R. Smith in a trade with the New York Knicks to give the Cavaliers some perimeter defence. The fourth year of his deal is a player option.

"You don't buy jewelry in this league, you earn it," Shumpert posted on Instagram while shouting out his agency, Relativity Sports. "Be back soon Cleveland."

So, too, will King James.

Now that Gilbert has spoken with his wallet and kept the team together, the path is cleared for James to sign another contract.